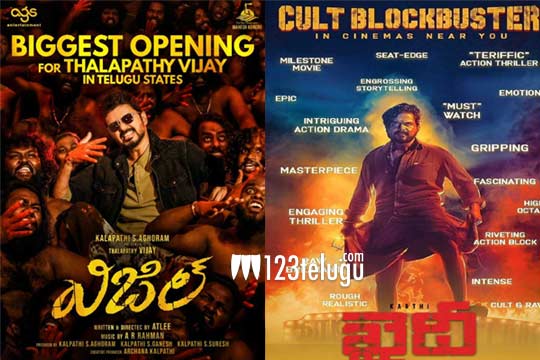 Released last Friday to decent reviews, Whistle and Khaidi, the Telugu dubbed versions of Tamil stars Vijay’s Bigil and Karthi’s Khaidi respectively, have had a solid run across the theaters in Andhra Pradesh and Telangana. The success of both the movies has revived Vijay and Karthi’s Telugu markets.

In Nizam, in its 4-day theatrical run, Whistle collected a decent share of Rs 2.32 crores, including a Rs 30 lakh share on Monday. The film is performing steadily on Tuesday and we can expect a decent run until the coming weekend.

On the other hand, Khaidi picked up quite well over the weekend and collected Rs 30.5 lakh share on Monday in Nizam. The film’s 4-day Nizam share is Rs 95 lakhs. In several areas, Khaidi has surpassed Whistle’s collections on Monday and is looking to dominate throughout this week.