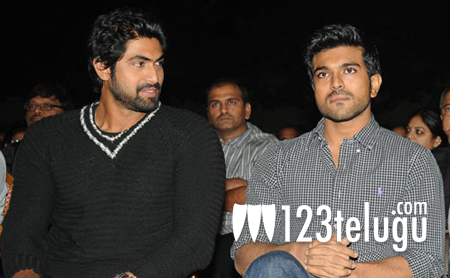 Over the last two decades, the Big Four of Tollywood – Chiranjeevi, Balakrishna, Venkatesh and Nagarjuna, have rarely shown an interest in working with each other for multistarrers. But the younger generation appears to be changing. Venkatesh and Mahesh Babu broke the trend and are working together for the upcoming ‘SVSC’. Now, Rana Daggubati has expressed a desire to work with Ram Charan in a film.

At a promotional event for ‘Krishnam Vande Jagadgurum’ in Srikakulam, Rana announced that he will appear in a movie with Ram Charan very soon. “Charan is a childhood friend and we grew up and studied together. I will make a film with him very soon”, he said.

Rana also announced that he would be working in a movie with director Selva Raghavan. It is heartening to note that young stars are stepping forward to work with each other. Expect more multistarrers over the next few years folks.