With a record release, can Agnyaathavaasi surpass Baahubali 2’s openings?
Published on Jan 6, 2018 9:22 am IST 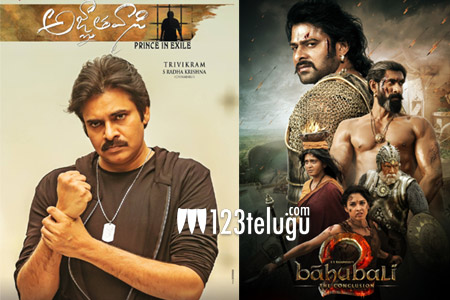 The hype and hoopla around Power Star Pawan Kalyan’s highly-anticipated silver jubilee film, Agnyaathavaasi, is increasing with each passing day as the release date is fast approaching. Agnyaathavaasi is all set to hit the screens worldwide on January 10, with an unprecedented number of US premiere shows being planned on January 9.

It’s been reported already that Agnyaathavaasi will be premiered in the US in as many as 457 screens, an all-time highest release for any Indian film. The ticket rates are priced at $25 for adults and $20 for kids for the premieres and already, most shows from all major cities are reporting full houses.

Meanwhile in the twin Telugu states, Agnyaathavaasi is getting a record release in almost all the centres. A huge number of early morning benefit shows have been planned and the permission for a hike in the ticket rates has been acquired already.

All said and done, all eyes will now be on Agnyaathavaasi’s premieres and opening day collections. Fans and trade analysts are gung ho about the film surpassing several opening day records set by the all-time industry blockbuster, Baahubali The Conclusion.

For the record, Baahubali 2 had collected nearly $2.5 M from the US premieres. The film also raked in a whopping Rs.43 crore share on its opening day in the twin Telugu states.