World’s first non-linear single-shot film to release on this date
Published on Jul 4, 2022 7:30 am IST 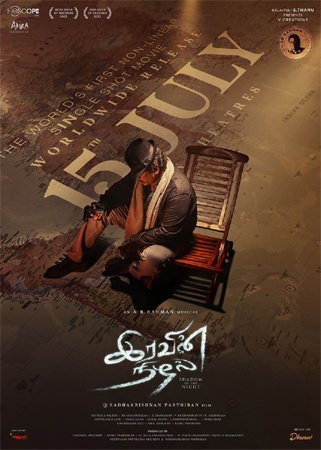 Tamil actor Parthiban often comes up with something new. Earlier he directed a film called Oththa Seruppu Size 7. The film had only one character which Parthiban himself plays. He has also written and produced that film, making it the first and only Tamil movie to have a single actor.

He is now coming up with a film titled Iravin Nizhal. This movie was made in a single shot without having an editor, making it the first Asian film to do so. A rehearsal was done for 90 days prior to the start of the shoot. The movie is also the world’s first non-linear single-shot film.

The movie will hit the screens on July 15th. The movie stars Varalaxmi Sarathkumar, Robo Shankar, Priyanka Ruth, Brigida Saga, and others in key roles. Apart from acting, Parthiban is also directing this movie, which has music by A.R. Rahman.

The actor needs to be lauded for always trying something out of the box. Let’s see what the filmmaker has in store for us in the coming days.