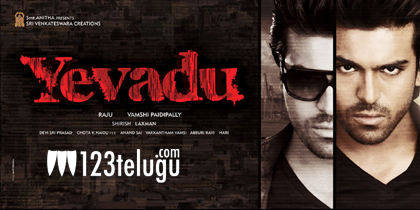 Mega Power Star Ram Charan’s ‘Yevadu’ is gearing up for a record release on the 31st of this month. The film is expected to get the highest number of theaters in Nizam and Uttarandhra areas. Due to the short gap between ‘Yevadu’ and Power Star Pawan’s ‘Atharintiki Dharedhi’, Dil Raju is aiming to maximise 1st week revenues for the film.

Post production activities are in the final stage and the film is expected to go in for censor certification on the 26th of this month. Shruti Haasan and Amy Jackson will be seen as the heroines opposite Charan in this movie.

Vamshi Paidipally is the director of this movie and Devi Sri Prasad has composed the music.