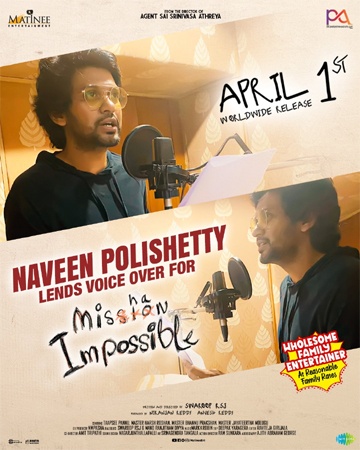 Bollywood actress Taapsee Pannu will be seen next in a Telugu movie, Mishan Impossible. Directed by Swaroop RSJ, the movie is all set to release in theaters this Friday. Ahead of that the makers have planned to hold a pre-release event tomorrow.

Now, the latest news is that Naveen Polishetty is roped in to lend his voiceover for the movie. The young hero’s voiceover will definitely be an added advantage for the film which is already carrying fantastic reports, ahead of its release.

The film will be high on entertainment with some unexpected twists and turns in the narration. The promotional content released so far have created huge expectations on the movie.

Having Harsh Roshan, Bhanu Prakashan and Jayatheertha in key roles, the movie is produced by Niranjan Reddy and Anvesh Reddy. Mark K Robin has composed music for this movie, which has Suhas, Sandeep Raj and Rishab Shetty in special roles.