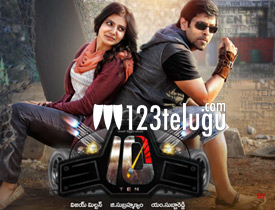 Continuing the trend of dubbing films, Vikram’s 10 Endrathukulla has now been dubbed in Telugu as ‘Ten’ and has released today. Let’s see how it is.

Vikram is a fancy car driver who delivers various parcels for the bad guys. One fine day, he is given a special parcel and is asked to deliver a particular car to some unknown people. When he reaches half of his destination, he comes to know that he is kidnapping a girl called Shakeela along with the car. Rest of the story is as to how he saves the girl from the bad guys.

There are only a few plus points in the film and one among them is Samantha. Irrespective of the film’s illogical narration, Samantha’s cute looks, and innocent performance is the one which keeps things going.

The various car chases shown in the film have been designed quite well and look good on screen. Vikram sleepwalks in his role and is good here and there. Abhimanyu Singh is just about okay in his role.

The first thing you right away think of is that how in the world did Vikram approve of that script. There is absolutely nothing for a performer like Vikram to be excited about.

The film is only about a car journey and how the lead pair faces obstacles and come out successfully. Not one episode manages to create an impact whatsoever. The villain gang and the way the entire crime scenario is showcased looks outright silly.

There is barely any chemistry between Vikram and Samantha, who seem over-enthusiastic and overplay their parts. The director takes time to set up things and even when the plot kicks in, there are speed bumps in the forms of songs.

The camerawork by Bhaskaran has nothing good to boast. Production values are horrible for this low budgeted film. As said earlier, the action sequences are good. Editing is pathetic. Music is below par and so was the background score. Coming to the director Vijay Milton, it is quite surprising to see a talented director like him execute a film like this. There is absolutely no story and the screenplay goes for a toss making the audience look for the exit doors.

10 Endrathukulla was one of the biggest flops in Vikram’s career and same is the case with the film’s dubbing version as well. Lack of basic storyline, uneven screenplay and dragged out scenes make this film quite boring and outdated. Except for some fancy car chases, this film ends up as a tedious watch this weekend. Stay away from this one even if it comes on TV.