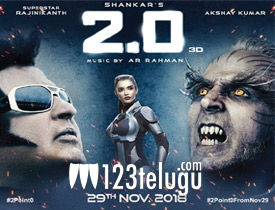 Post the release of Baahubali, 2.0 is the only film which has created such a sensation with its pre-release hype all over. Touted to be the costliest film ever made in Indian cinema, the visual extravaganza has hit the screens today. Let’s see how it is.

The film is based in Chennai where mobile phones keep disappearing because of a deadly bird called Pakshi Raju(Akshay Kumar). The government which has no clue about this, orders Vaseegaran(Ranjini) to bring back Chitti and handle the situation. But to fight Pakshi Raju, Chitti’s powers are not enough. This is the time, Vasi’s personal robot Vennela(Amy Jackson) creates a new version of Chitti and prepares it to fight with Pakshi Raju. Rest of the story is as to how the 2.0 Chitti fights Pakshi Raju and saves everyone.

The first and foremost thing that hits you right away is the sheer scale of the film. Apart from having a genuine social message, Shankar has imagined something really different and made a visual spectacle which Indian movie lover can be proud of. You can’t but praise the magnanimity of the project as every penny spent is showcased through superb visuals on screen.

Rajinikanth like always surprises you with his childlike enthusiasm. He plays different characters and does justice to each one of them. Especially, with the 2.0 version, where he comes up with unique mannerisms is just amazing and will be loved by the fans completely. Amy Jackson is superb as the humanoid and does her role perfectly.

Perhaps, no one could have done the role better than Akshay Kumar who plays the antagonist. The Bollywood superstar is amazing as the evil bird and elevates the proceedings in the last half an hour completely. The manner in which the graphics have been used on Akshay, his makeup, and the way he fights 2.0 is way too good.

One of the basic minus points is that Chitti 2.0 is brought way too late in the proceedings. Also, the flashback of Akshay Kumar slows down the tempo at the beginning of the second half.

There is not much entertainment in the film as it runs on a serious thread and has less scope for romance or comedy. All those who watch Hollywood films a lot will surely compare 2.0 with those standards and might find the VFX in 2.0 a bit dull.

2.0 is packed with so much technical brilliance that it is very hard to put everything here. AR Rahman breathes life into the background score. Every character has a different sounding and the manner in which the thrills are elevated is too good.

Camera work is astonishing as the cell phone turning into a bird or the manner in which the scientific effect is showcased is top notch. The production design of the film is amazing as the sets that have been laid or the whole robotic setup is well executed.

The VFX used in the climax is one of the best and proves that Indian cinema is not far behind Hollywood films and their standards. Editing is perfect and so is the Telugu dubbing done. The costumes selected for Rajini and Akshay are futuristic and create a wow effect.

Coming to the director Shankar, he has once again proved that there is no one better than him who can deliver such a visible spectacle along with a social message. The manner in which he made a cell phone key element in the story and played around it with superb VFX and engaging narration gives this film a superb experience for the viewers.

On the whole, 2.0 is a visual extravaganza which makes you go wow in every which way. Be it the international level VFX, thrills between Rajini and Akshay, lavish sets and amazing climax, this film has it all and is a thrilling experience for the viewers. As 2.0 has a universal theme, it will be loved all over the country and break several records in the south. Barring the same old good vs evil concept and Akshay Kumar’s dull flashback, 2.0 is one film which should only be experienced on the big screen as scientific thrillers like these are rarely made in India. What are you waiting for, just book your tickets and watch the film with your family and have a whale of a time.