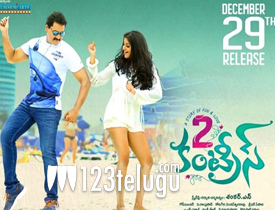 2 Countries is Sunil’s last chance to score a hit at the box office. The film which is directed by N Shankar has hit the screens today. Let’s see whether Sunil gets his much needed hit or not.

Ullaas(Sunil) is a cunning guy who can go to any extent for money. One fine day, he cheats a priest and redirects an NRI match which is supposed to go to a known person in his village. He manages everything and finally ties the knot with Laya(Manisha Raj). The twist in the tale arises when Ullaas comes to know that the NRI girl he married is a complete alcoholic. Rest of the story is as to how Sunil manages to get his problematic wife back on track.

Production values of the film are pretty good as half of the film is shot in the US. Heroine Manisha Raj makes an impressive debut as she looks quite beautiful and even performs well in her role of an NRI.

Some comedy featuring Srinivasa Reddy and Prudhvi impresses in bits and pieces. Sunil is just about okay in his role and does what is needed. The last ten minutes featuring some emotions between the lead pair have been handled well.

2 Countries is a bad remake of a hit Malayalam film. Director Shankar gets it wrong right from the word go as he does not establish the story well. Things get monotonous as the outdated comedy and forced emotions start irritating you right away.

Even when the film enters the main story, the twist regarding the heroine’s character is showcased on a silly and shoddy note. The comedy is so over the top that you start thinking whether it is the same director, Shankar, who has made some meaningful films in the past.

Even in the second half when the film moves to the US, the proceedings become so cheap that you start looking at the exit doors. It is surprising to see a good actor like Naresh behave so over the top with his fake US accent.

Music by Gopi Sundar is just about okay. Camera work is decent and so was the production design. Dialogues were quite funny and have been written well. Editing is pathetic as at least 20 minutes of the film could have been easily cropped off. Coming to the director Shankar, it is very disappointing to see a talented director like him execute a film like 2 Countries. He has not impressed in a single department and made Sunil and the rest of the star cast look so over the top. The way he executed the story by making it quite silly has ruined the viewing for the audience completely.

On the whole, 2 Countries is an over the top and silly entertainer which has nothing going its way. Halfway through this film, you start wondering as to what made Sunil accept this project when he is going through such troubled times. Bad writing, silly proceedings and over the top performances kill the film completely. All those who like to see Sunil’s style of comedy can give this film a shot. But others can stay away from this one even when it is aired on TV.