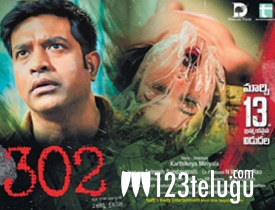 Among several other low budget films, yet another film titled 302, a crime thriller has hit the screens today. Let’s see how it is.

Avantika((Bhavika Desai), is a middle-class girl who falls in love with a rich boy named Raj(Ravi Varma). One fine day, she decides to meet him in a hotel. As soon as she goes there, Avantika finds out that Raj is all set to cheat her and fly away abroad. Knowing this, she starts quarreling with Raj and one of them gets killed accidentally. Who is one that gets killed? What will happen now and how does the rest of the story unfold in the whole crux of the film.

Vijay Sai, who passed away recently plays a key role in this film. The way his role helps the heroine throughout the film is good and Vijay Sai does a very good job with it. Heroine Bhavika Desai does well in her glamorous role and provides a lot of eye candy.

Once again, Vennela Kishore does a good job and evokes good fun in his role as a person who forgets things. The songs of the film are decent and have also been shot well. The other key cast like Tillu Venu, Jabardasth Rakesh, Ravi Varma, and Tagubothu Ramesh did well in their roles.

As the film has been delayed a lot, everything looks outdated and is out of place. There are so many characters that enter the scene without any connection to the main story. That is the sad stage of the film as the story and the main theme is not clear at all.

The screenplay goes for a toss as many scenes are there just for the heck of it and are so over the top that you keep looking at the exit door time and again. Even after having good actors like Vennela Kishore and Tillu Venu, the director did not make use of him properly.

As said earlier, the songs of the film are decent but the BGM is over the top and cheap. Editing is a disaster and so is the camerawork which is out of place most of the time. The makers have also not followed basic production values for the film. Coming to the director Karthikeya, he has done a poor job with the film. His writing has no seriousness at all and goes off track except for a few comedy scenes.

On the whole, 302 is a botched up thriller which goes wrong in many departments. Silly and over the top scenes, lack of seriousness in thrills irritates the audience to no extent. Vennela Kishore is the only solace of this film which ends as dead rubber this weekend. Stay away from this one.