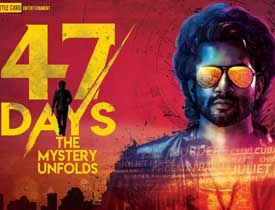 Continuing the flow of OTT releases, a new Telugu film that has hit the screens today is 47 Days. Directed by Pradeep Maddali, this film has Satyadev as the main lead and is available on Zee5. Let’s see how it is.

Satya(Satya Dev) is a suspended ACP in Vizag who is looking for reasons behind his wife, Paddu’s(Roshini Prakash) mysterious death. One fine day, he comes to know that a lady named Juliet(Pooja Jhaveri) is involved in all this. He starts investigating her but falls prey to a drug case. What is this drug case all about? Who is this Juliet? and how is Paddu connected to all this? That forms the rest of the story.

Satyadev is the biggest highlight as the whole film runs on him. The noted actor gets a tailor-made role and does well as a frustrated cop filled with an emotional backdrop. Satya is superb in all the investigating scenes and brings a lot of depth to the film.

Pooja Jhaveri is very good in her key role and holds the film well. Roshini Prakash is also decent in her small role. With each passing film, Srikanth Iyengar is turning out to be a solid actor and does supremely well in this film too. He has a special aura and his solid dialogue delivery gives an edge to his performance.

The initial part of the film is good as the suspense factors have been designed well by director Pradeep Maddali. Ravi Varma is also good in his cop’s role.

One of the basic drawbacks of the film is the weak screenplay. Thrillers like these that go back and front in time need to have a solid grip on the screenplay which is missing here. Though the scenes keep you guessing as to who the killer is, they are a bit dull.

Also, the director leaves the main thread of the hero’s wife missing in the background. Logically, the hero is looking for the big fish but he forgetting the main issue of his wife, and the director discussing it only in the last scene looks a bit odd. Even that thread should have been handled effectively.
Technical Aspects

Production values of the film are pretty decent and credit should go to the cameraman for showcasing Vizag in a beautiful manner. The dialogues are pretty good. Music by Raghu Kunche is pretty average but his BGM was good. The basic art design and the detailing in the proceedings are neat. Editing is below par as at least ten minutes should have been chopped off in the first half

Coming to the director Pradeep Maddali, he has written a decent story and also places his characters well. He also starts the proceedings well and brings in the suspense factor effectively. But post that, he takes way too much time to come to the breakpoint. His direction is not bad but he misses to add gripping scenes in the film which is key for any thriller.

On the whole, 47 Days has a decent story and interesting premise. Satyadev’s one-man show also holds the film to an extent. But the lack of gripping scenes that a thriller needs are missing here giving the proceedings a dull effect most of the time. The film is not so bad but it does not excite you either.