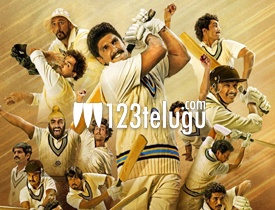 83 is one of the most-awaited films as it brings back the memories of the first world cup that ever won. The film starring Ranveer Singh has been released today. We watched the Telugu version and let’s see how it is.

The story is simple and tells us about how the Indian cricket team, being underdogs go to England and wins the prestigious 1983 world cup in the captaincy of Kapil Dev played by Ranveer Singh.

One of the biggest plus points of the film is the way the whole euphoria is created by the makers. The VFX used for all the matches and recreating the bygone era impresses you the most. All the thrills and various matches showcased look quite realistic in the second half.

Ranveer Singh as Kapil Dev has lived in his character. Be it his makeup or bowling action, Ranveer has done a superb job in the film. Deepika is seen as Kapil’s wife and she is decent in her cameo. Pankaj Tripathi plays the Indian team manager and he does an impressive job in his role.

Yet another asset of the film is Tamil actor Jiva who plays Krish Srikanth. Jiva does a superb job and makes you believe that you are indeed watching Srikanth bat and emote on screen. Saqib Saleem plays Mohinder Amarnath and he too does well.

The second half of the film has good patriotic moments and the actual action of how India won the world cup is showcased here. The interval bang and the way real-life incidents during the matches are showcased are well thought of and look authentic.

As the world cup was won way back, not many of us know what happened actually. The makers should have introduced the players in a better manner so that the audience would get accustomed to who did what in those times.

The length of the film is also a tad long and there is not much drama in the first half. Even though the script has good scope for it, the director Kabir Khan ran through the proceedings and focused more on the matches. This is where the emotional part takes a slight beating.

As said earlier, the production values are just top-notch. The setup, camerawork, VFX, and the manner in which the euphoria in the stadium is recreated is top class. Music is just about okay in Telugu but the BGM could have been better. Telugu dubbing is pretty good and so was the costume design. Editing could have been better in the first half.

Coming to the director Kabir Khan, he has done a decent job with the film. As not many of today’s generation is aware of how India won the world cup, he re-created the matches and tension well. But he let go of the emotional part making the film dull in a few areas.

On the whole, 83 is a decent sports drama that re-lives the historical world cup victory of the Indian cricketing team. The look, star cast, and cricket matches are top-notch. Ranveer Singh is stunning as Kapil Dev and the second half is filled with patriotic moments. However, the film is slightly low on emotional drama. Barring this, all those who love cricket will surely connect to the film and for the rest, it will be just a one-time watch this weekend.