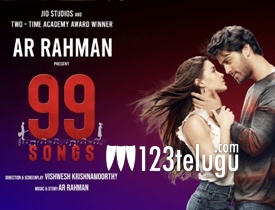 Oscar-winning composer AR Rahman has forayed into film production with the just released romance musical drama, 99 Songs. Apart from bankrolling the project, Rahman also penned the story for it and this has created a decent buzz for 99 Songs. Let’s see how the film fares.

Jai (Ehan Bhatt) has a burning passion for music since childhood. He falls in love with industrialist Sanjay Singhania’s (Ranjit Barot) daughter Sophia (Edilsy Vargas). Sanjay proposes to commercialize Jai’s music to accept his love. But Jai opposes Sanjay’s proposal and vows to make 100 songs that will change the world. The rest of the story is all about the conflicts Jai faces in his musical journey.

99 Songs is an ode to music and passionate musicians like Jai who are out to change the world with their soul-stirring music. The innumerable challenges and humiliation musicians like Jai face in this commercialized world hve been portrayed quite effectively. Ehan Makes an impressive debut in terms of looks and performance.

Another newcomer Edilsy Vargas, who played the leading lady Sophia, too, performed quite well in her role. The emotions she portrayed in the romance track with Ehan and in all the conflict scenes will leave the audience impressed. Seasoned actresses Manisha Koirala and Lisa Ray suited their roles perfectly. The actor who played a key role as hero’s friend Polo shines in his role. The rest of the actors too have done their part well.

Even though 99 Songs showcases the passion and perseverance of the protagonist in creating music that changes the world quite well, the slow and snail-paced narration leaves the audience underwhelmed. The scenes involving the protagonist Jai’s conflict in creating the 100 soundtracks that will change the world should have been showcased in a more emotional manner.

Audiences who go to watch 99 Songs must expect a realistic drama that unfolds at a leisurely pace rather than expecting a usual romantic entertainer loaded with commercial elements.

AR Rahman, who has turned story writer for the first time, does complete justice to it by coming up with the right emotions. Even though the narrative is slow and moves at its own pace, Rahman’s scintillating songs and background score not only offer a great relief but also add depth to the conflict in the story.

Cinematography by Tanay and James is very impressive and brings out the conflict in the story quite effectively. Even Akshay and Shreyas’ editing is decent and helps the story evolve in its own stle and pace. AR Rahman turned producer with 99 Songs and he made sure the film looked best in terms of production values.

On the whole, 99 Songs has an engaging story with strong emotions and the movie is laced with soulful music. However, the laidback narration dampens the audiences’ viewing experience to a great extent. Also, lack of notable lead actors and a regular commercial template may not appeal to those who expect a wholesome commercial potboiler. You may watch 99 Songs for its decent musical score and if you are a hardcore Rahman fan. For the rest, the movie will offer only a few highs.