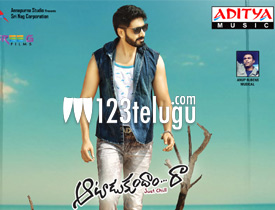 Sushanth is testing his luck once again at the box office with the film Aatadukundam Raa. The movie which has been directed by G. Nageswara Reddy has Sonam Bajwa as the heroine. This film is crucial for Sushanth as he is still looking for a decent break in his career. Let us see if he has a chance with this comic entertainer.

Story:
Anand Rao (Anand) and Vijay Ram (Murali Sharma) are thick friends who are into various business ventures. One day, due to a misunderstanding, Vijay Ram accuses Anand Rao of cheating him and breaks up his friendship.

Twenty-six years later, Karthik (Sushanth) who is the nephew of Vijay Ram and an NRI, comes to India to help his family who land themselves in trouble. While doing so, he falls in love with Vijay Ram’s daughter Shurthi (Sonam Bajwa).

Unknown to everyone, Karthik also has a dark secret and a secret mission that he wants to accomplish. What is Karthik’s secret mission? How does Karthik help out his family who are in trouble? These questions form the crux of the story.

Sushant has improved a lot as an actor. He has good grace as a dancer and his new look suits him quite well. Sonam Bajwa impresses as a debutante and looks stunning. Her acting skills are also decent. Sonam’s costumes and skin show will work in B and C centers.

30 years Pruthvi manages to generate a few laughs as a TV serial director. His comedy scenes with Sushanth have come out quite well. The interval twist spices up things a bit and manages to hold the interest of the viewers.

Akhil and Naga Chaitanya’s special appearances have been handled well. A few comedy scenes in the first half are just about okay.

Minus Points:-
Aatadukundam Raa provides absolutely nothing in terms of storyline. Even though the first twenty minutes are interesting, the movie falters after that and fails to pick up for the rest of the run time. Except for a few scenes, the second half provides nothing but unrelated comedy.

The movie gets sillier as it heads towards the climax and a few songs come as major speed breakers. Brahmanandam and Vennela Kishore are totally wasted in badly written cliche characters.

Given the film’s budget, the production values are splendid. Background music by Anup Rubens is impressive while his songs are average. Editing is mediocre as a lot of unnecessary scenes could have been left out. Camera work is acceptable.

Coming to director Nageswara Reddy, even though he has provided some decent comic entertainers in the past, he disappoints with this film. A better story and logical screenplay by him could have made the film much better.

On the whole, Aatadukundam Raa is a film with beaten to death formula and routine entertainment. Even though Sushanth and Pruthhvi try hard to save the film, the non-existent story and absurd comedy give a hard time for the audience. Watch it only if you have nothing else to do.