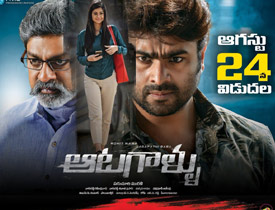 Nara Rohit keeps churning out films one after the other. Next in line is his new film Atagallu which also has Jagapathi Babu in a crucial role. The murder mystery has hit the screens today and let’s see how the film turns out to be.

Siddharth(Nara Rohit) is a reputed film director who gets arrested for his wife’s(Darshana) murder. During the course of the case, a high-profile public prosecutor called Veerendra(Jagapathi Babu) fights Siddharth’s case and sets him free of all charges. The twist in the tale arises when Veerendra finds out that the murder mystery has a different set up completely. What is this set up? Who is the actual murderer? and how does Veerendra solve this murder mystery? That forms the rest of the story.

Senior actor Jagapathi Babu is decent in his role of a reputed lawyer. All his courtroom scenes have come out quite nicely and create an interest factor. Nara Rohit is out of place in his role during the first half but catches up well as the film and his role take different turns. Subbaraju is good in the role of a negative cop.

Debutante Darshana makes a decent debut and looks good in her emotional role. Looks wise, she is decent and manages to make an impact. The confrontational scenes between Jagapathi Babu and Rohit have been designed quite well in the second half and create some interest factor as long as they are on the screen.

The basic thought behind the film is good but it is narrated in a very old school manner. The film falls flat with the first scene itself as a little girl is shown coming out of a coma just for two minutes which looks silly and over the top.

Brahmanandam irritates you to no extent with his silly comedy which does not evoke any laughs but also sidetracks the film completely. The first half goes for a toss as the director is left with no scenes to establish the murder plot properly. Except for Subbaraju, the supporting cast is horrible and do not add any depth to the film.

The writing is silly and a few scenes are so old school that you might have seen them in hundreds of movies earlier. Nara Rohit’s character is not justified properly in the second half. The lead up to the climax is dull and the way the film is ended leaves a lot to be desired.

Production values of the film are just about okay as many scenes look outdated. The camerawork is a disaster as the film clearly looks out of sync and is not soothing to the eye at all. The music by Sai Karthick is pathetic and even horrible is his special appearance as an item boy which will make you look for the exit doors. Editing is below par as many scenes in the first half featuring Brahmi should have been edited.

Coming to director Paruchuri Murali, his narration is stuck in the 90’s as there is not a single episode which is novel or has been written with a lot of thought. His basic idea was somewhat okay but Murali’s direction lets the film down completely with the first half being completely silly.

On the whole, Atagallu is an old school murder mystery which you might have seen many a time in the past. As long as Jagapathi Babu and Nara Rohit take center stage, things look good and watchable. But the rest of the narration, screenplay and suspense factor are ages old and have nothing new to offer making the film a routine and outdated watch this weekend.