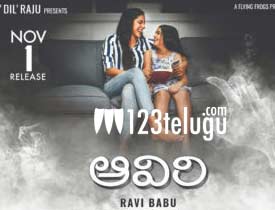 After the debacle of his last film, Adhugo, noted director Ravi Babu is back with yet another experimental film titled, Aaviri. The film has hit the screens all over today. Let’s see how it is.

Rajkumar Rao (Ravi Babu) is a well-established businessman who leads a happy life with his wife and kids. But sadly, one of his kids dies of an Asthma attack and the other girl starts behaving in a weird manner by speaking with an invisible spirit. Who is this invisible spirit? Is it the soul of Rajkumar’s elder daughter? Why is it target Rajkumar Rao’s family? To know this, you have to watch the film.

The introduction scene that showcases the death of Rajkumar Rao’s elder daughter has been executed in an interesting manner and creates curiosity in the proceedings. The little girl, who acted as the younger daughter did a good job as her expressions are very good. Hushaaru Priya Vadlamani gets a key role and acted her part impressively in the given limited screen space.

The climax twist where the entire plot unfolds has been presented in a decent way. A few suspense-filled scenes related to the girl are good in the first half. Ravi Babu, Neha Chauhan, Bharani Shankar, Mukhtar Khan are okay in their given roles.

Ravi Babu’s idea of making a horror flick based on invisible spirits is appreciable but his screenplay lacks grip and his narration is not brisk. After an interesting opening scene, the film falls flat with lifeless proceedings and artificial emotions from the lead artists.

As the film mostly runs on limited characters, the audience may feel like watching a teleserial more than a feature film. The horror elements in the film are not handled in a proper manner hence they end up as comedy spoofs instead of creating a fearful atmosphere.

The film has too many logicless scenes as the circumstances in the house and in Rajkumar Rao’s office are totally tangled. The over the top setup of the film also doesn’t look justifying to the film’s genre.

As said above, director Ravi Babu’s thought of making a film on invisible spirits is nice but his narration has many loopholes. The film’s pace and execution will make the audience look at the exit doors. The production design of the film is cool and has various trendy properties involved. The background music of the film is okay to an extent.

Editing work is a big letdown. Although the film has hardly 2 hours runtime, the audience feels like watching a lengthy film. Cinematography is impressive as the color combinations in the house and framing offer the audience a fresh feel. Production values for this low budget film are adequate.

On the whole, Aaviri is a spineless horror-thriller that lacks proper content and presentation. Looks like Ravi Babu, who is known for making horror thrillers has taken things for granted with Aaviri as the film is hardly engaging and ends as a miserable watch this weekend.