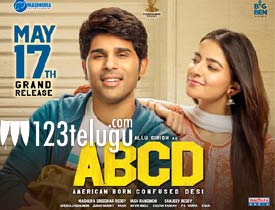 Allu Sirish has pinned a lot of hopes on his new film ABCD which is the remake of the Malayalam hit film with the same name. The film has hit the screens today and let’s see how it turns out to be.

Aravind(Allu Sirish) is a rich spoilt brat in the US who does not have any value for money. Seeing his careless attitude, his dad(Naga Babu) sends him to India to understand the real value of money. At first, Aravind feels that it is a jolly trip but comes to know that his father has cut off all his finances. Rest of the story is as to how Aravind survives in India and crosses paths with Neha(Rukshar) and knows the harsh realities of life.

When compared to his previous films, Allu Sirish looks way better and does his role well. Performance wise, he has improved a lot and is now at ease in front of the camera. Sirish has a good comedy angle in him and that has been captured well in this film

Vennela Kishore is hilarious in the role of a news reporter. His body language and the manner in which he evoked the spoof comedy of the TV reporter is way too good. But sadly, his role is short lived. The first half of the film has some fun during the first half an hour. Rukshar Dhillon looks natural and was neat with her performance. Comedian Bharath was decent but he was not utilized properly.

Raja Chambolu who played the main villain is quite impressive. He is a very gifted actor and it will be good to see him getting bigger roles in the future. Kota Srinivasa Rao was fine and so were the other supporting actors. The hotel scenes in the first half featuring Harshvardhan evoke decent fun.

One of the basic minus points is that the film lacks proper narration in the second half. The manner in which the hero realizes the value for money and basic human emotions could have been established in a proper manner. The second half could have had a tighter screenplay.

Also, the makers had good scope to induce more comedy in several areas but they missed out on that. Comedian Bharath is not utilized properly and the love track is also boring. Naga Babu sleepwalks in his role of Sirish’s dad.

The villain’s conflict with the hero or the manner in which this track is induced in the story is not convincing at all. The climax of the film is disappointing as things are ended in an emotionless manner.

Production values of the film are just okay and could have been better. The camera work is passable but the music and background score are top notch. Dialogues are very good and have been written with decent humor. Sirish has been dressed well in the film.

Coming to the director Sanjeev, he has done just an okay job with the film. He starts the proceedings on an interesting note and holds the first half well. But he loses track in the second half and narrates this part in a haphazard manner with not many proper emotions.

One the whole, ABCD is a youthful comedy which works only in parts. The film starts well and evokes decent fun in the first half. Allu Sirish does well with his impressive performance but the boring second half and the improper climax take things down. So, watch the film with low expectations so that the viewing experience would be satisfactory.