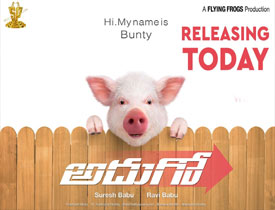 Ravi Babu’s Adhugo has been in the making for quite some time now. The piglet comedy has hit the screens today and let’s see how the film turns out to be.

Bunty is a cute piglet which gets misplaced through a courier and reaches the lead pair who are looking for their lost puppy. This is the also the time when Sixpack Shankar(Ravi Babu) and a few other gangs are after the piglet for a special reason. Things go out of hand when all the groups start fighting for it like cats and dogs. Why are all the gangs behind Bunty and how does the piglet escapes all these tricky situations forms the rest of the story.

Ravi Babu is good in his role of sixpack Shankar. The comedy derived from his character and the manner in which he chases the piglet looks decent. The piglet has been created through VFX and for the budget chosen, the visual effects are decent enough.

Nabha Natesh is neat in her role but does not get enough screen time. There are a few comedy chases featuring the piglet which have been executed pretty well in the last five minutes of the first half. One of the villains who has anger management issues has been showcased in a funny manner. His track is decent but is a bit overdone during the climax.

One of the biggest drawbacks of the film is the presence of too many subplots. After a point, characters keep entering the plot making the proceedings clumsy and confusing.

The film misses out on basic emotions as none of the scenes create any impact. The second half of the film gets even boring as silly comedy is thrown at us which does not work most of the time.

All the characters have a proper backstory but they are not executed in an interesting way. There was scope for even more comedy but the makers missed out on that in several areas.

As said earlier, the production values of the film are decent as the piglet looks convincing. Prashanth Vihari’s music is just about okay and so was his background score. The camerawork is neat and so was the entire production design. Editing is adequate but the screenplay goes for a toss as all the subplots and the gangs who are chasing the piglet have not been dealt well.

Coming to the director Ravi Babu, his idea of choosing a piglet as the main protagonist is good but he confuses the audience with too many layers. Had he created one or two gangs chasing the piglet and derived a simple chase comedy, things would have been even better.

On the whole, Adhugo does not live up to all the hype that has been created prior to the film’s release. There is not one episode which looks convincing as the proceedings bore the audience completely. What we get to see in the name of comedy is a chaos of chases throughout the film with silly and over the top scenarios. Skip this film this weekend and look for other options this Diwali.