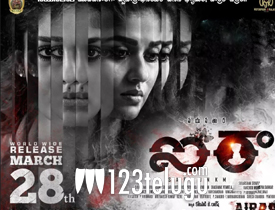 Airaa is one film which has been in the news for Nayanthara’s de-glam look. The film has simultaneously released in Tamil and Telugu today and let’s see how it turns out to be.

Aira(Nayanthara) is a media baron who runs away to her native village to escape her marriage proposals. There, she starts experiencing weird activities in her home. Seeing this, she makes videos of them and becomes a YouTube sensation. But to her bad luck, things become serious as one of her family members dies in a spooky incident. Who is behind all these incidents? What do they have to do with Airaa? Where does the de-glam Nayan feature in this setup?. To know the answers, you need to watch the film on the big screen.

Undoubtedly, Nayanthara is the heart and soul of the film. She is superb in both her roles but is staggering in the de-glam role of Bhavani. The torture she goes through and how she faces curses all the time have been nicely showcased in the film. Nayan leads from the front and is drastically different in both the characters and carries the film on her shoulders.

The second half of the film is where the actual action happens. All the twists of the film are revealed slowly and make some sense. There is another parallel story which runs in the film and this has also been narrated well. Kalaiyarasan, who is featured in this part is good an emotional husband who loses his wife.

This film has minus point galore. Firstly, the twists in the film do not come for the entire first half. This makes the proceedings confusing and boring many times. The director should have added a twist in the interval point to make people understand what is happening in the film. Instead, he shows the parallel stories in a boring manner.

The pace of the film is dead slow and this is where the film goes for a toss. The makers take so much time that you feel like going to sleep in certain scenes. Even after the twists in the flashback are cleared, the director adds so much of unnecessary drama that will irritate you completely.

Upon this, the climax is so weird that it is hard to believe at once and is not convincing at all. The second half which needed to be crisp is tedious as same old emotional drama is shown again and again.

Production values of the film are pretty good as the spooky elements have been showcased well. Special mention should go to the BGM by Sundar Ramurthy which elevates the film nicely. Dubbing is decent and so was the whole production design. Coming to the director Sarjun, he has done a disappointing job with the film. His story selection is weak and just to give Nayan both good roles, he has forgotten the narration which goes for a toss. The film is told in a slow manner which gets boring by the end with a silly climax.

On the whole, Airaa is slow and dragged out horror thriller which has only a selected few good scenes. Nayanthara leads from the front and gives a superb performance. But even her star power cannot save the film as the narration is old school and takes the film down many a time. All those who want to see what Nayan is up to in a de-glam role can give this film a shot but there is nothing exciting or thrilling that this film showcases for the audience.