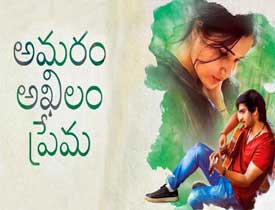 So, continuing the series of reviewing movies and shows during the lockdown period, our today’s pick is the Telugu film Amaram Akhilam Prema. The film has skipped its theatrical release and is out on AHA. Let’s see how it is.

Right from her childhood, Akhila(Shvashakti Sachdev) is very close to her dad(Srikanth Iyengar). The father and daughter cannot live without each other but a major mistake committed by Akhila creates a rift between the two. This is also the time when Akhila comes to Hyderabad for her IAS coaching. There, a young guy named Amar(Vijay Ram) starts wooing her. At first, Akhila says no to Amar but gets attracted to him later. The rest of the story is as to how Akhila wins her father’s love all over again and settles with Amar.

The emotions in the film are pretty strong and are maintained well right until the end. The dialogues are also quite emotional and have a lot of depth in them. The manner in which the film is ended in a very sensible manner justifying all the characters looks good.

With each passing day, Srikanth Iyengar is getting solid roles and proves that he can do all sorts of characters. He brings a lot of depth to the film. Though he is missing for the major part in the film, Srikanth does a solid job in the last fifteen minutes. All his scenes with his daughter look quite sensible.

Look-wise, hero Vijay Ram is just okay but he is decent with his performance. But the star of the film is the popular Hindi TV star Shivashakti Sachdev who was amazing in her role. She had a difficult role but she brings in all her experience and showcases beautiful emotions. She had to underplay her emotions and the young actress did it with aplomb.

The first half an hour of the film is bland and irritates you. Though the love scenes are okay, they have been showcased in so many films already. The way the hero tries to woo the heroine looks so routine and outdated.

The film enters the main part only during the interval bang and until then, one needs to have a lot of patience. The heroine’s father getting upset with his daughter is dragged a bit too much. More drama and a bit of justification through father’s role should have made things effective.

The production values of the film are pretty good and especially the visuals are neat. Editing is bad in the first half as close to fifteen minutes should have been trimmed. The music is just about okay but the BGM was good. The production design is neat and so were the lyrics of the film.

Coming to the director Jonathan Edwards, he has done an okay job with the film. Though he bores the audience in the first half an hour, he holds the film well from the second half. His grip on emotions is strong and he narrates the film in a very sensible manner with good moral values. The love story is also not rushed and looks mature and sensible.

On the whole, Amaram Akhilam Prema is a family drama with a romantic backdrop. Taut performances, a simple backdrop, and sensible emotions are major highlights. If you manage to sit through the boring first half and ignore the predictable proceedings, this film has a good second half and ends as a passable watch with your family. Watch it when you have time.