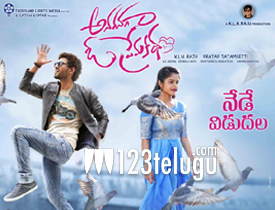 Continuing the trend of low budget films, yet another movie which has hit the screens today is Anaganaga Oka Prema Katha. Let’s see how the film turns out to be.

Surya(Viraj) is a happy go lucky youth who falls in love with every other girl he comes across. On the other hand, Ananya(Riddhi Kumar) is Surya’s best friend and loves him to death. As time passes by, Surya falls in love with Pooja(Radha Bangaru) and proposes to her. But to his bad luck, she ditches him for another person.

This is the time Surya realizes his true love for Ananya and comes running back to her. To his shock, Ananya completely ignores him? Why did Ananya, who loves Surya ignore him? What is the actual problem? and how did Surya solve it is the rest of the story.

Viraj is a good find and does quite well in his debut film. He lived in his character and showcases different variations in both the halves. Especially, his performance was good in all the emotional love scenes. Comedian Venu evokes decent laughs in his comic role.

Riddhi Kumar is neat in her given role and does well in the second half where she has a good scope to perform. The actor who played the heroine’s father was very good in his role. Second heroine Radha Bangaru was just about okay.

Even though the director has taken a key medical condition as a twist in the film, he could not generate a good drama through it. The way he narrated the love story was not adequate and this spoilt the feel of the film.

A number of scenes in the film look way too cinematic and have been added just for the sake of it. This is where the interest in the proceedings go down completely.

The pace of the film also hampers the flow in a big way. Except for the good interval bang, the rest of the second half goes for a toss. The so-called emotions showcased in the second half look forced.

Music by Anjan was just about okay but his background score elevated many scenes in the film. Editing by Marthand K Venkatesh was very good. Production values of the film were top notch. Coming to the director Pratap, he disappoints with his overall narration. He had a good point in hand, but his bland narrated took down the film with forced scenes and emotions.

On the whole, Anaganaga Oka Prema Katha is a romantic drama which is narrated in a haphazard manner. Even though the concept chosen for the love story is good, forced emotions, cinematic liberties, and unnecessary scenes spoil the flow of the proceedings completely making this film a very dull and boring watch this weekend.