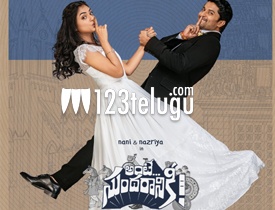 Nani’s new film, Ante Sundaraniki has been promoted quite aggressively over the last few days. Directed by Vivek Athreya, it has been released today, and let’s see how it is.

Sundar Prasad (Nani) is a young Hindu lad who wants to go to the US but is unable to due to his orthodox parents(Naresh and Rohini). On the other hand, Leela(Nazriya), is a Christian photographer whom Sundar knows from his childhood. Eventually, the two youngsters develop a romance but face trouble with their families. To get hitched, they create a big lie and end up in deep problems. How do they get over the conflict forms the rest of the story?

When it comes to playing the boy next door roles, it is a piece of cake for Nani and he is in his elements in Ante Sundaraniki. Apart from acting superbly in the emotional scenes, Nani’s comedy timing especially in the second half is superb and drives the film till the end. Without going overboard, Nani stays in his character and entertains thoroughly.

Nazriya makes an impressive Telugu debut and balances her part quite well. She emotes beautifully in a well-written role. Her chemistry with Nani is the best part of the film. The supporting cast is also a huge bonus for this film. Naresh and Rohini are amazing as Nani’s parents, especially Rohini in the climax, were impressive.

Naresh’s interactions with Nani are one of the highlights of the film. Nadhiya and Azhagam Perumal as Leela’s parents do a fine job. Harshvardhan gets a good role after a while and holds his own with Nani in some scenes.

Though the first half of the movie sets up the proceedings quite slowly, director Vivek Athreya’s writing is strong in the second half and brings out solid comedy, emotion, and thrill without going overboard by the climax.

The movie has a very run-of-the-mill plot that is predictable and has been seen many a time. Although it has been written freshly, the core concept is too simple. The narration in the first half, especially for the initial childhood sequences is boring and needs to be edited out a bit.

The runtime is a little bit longer and instead of the childhood sequences, the romantic angle between the lead pair should have been enhanced more. Nani coming from an orthodox background and falling for Nazaria should have been highlighted to create more entertainment.

Vivek Sagar’s music is very good but his BGM is what makes the difference in this family drama. It gives a fresh feeling to the film’s narrative. The cinematography by Niketh Bommi is impressive while the editing has a lag in the first half. Dialogues are an asset, while production values are quite good.

Coming to director Vivek Athreya, he has done a good job with the movie. His writing is layered with different threads which are connected well. His screenplay is fresh and adds a different angle to a regular plot that keeps the audience invested. Though the first half is slow and one gets a feeling why so much detailing is done for each character, everything has a connection and is shown quite well by the end of the film.

On the whole, Ante Sundaraniki is a well-made family drama that is devoid of regular masala moments. The fresh pairing of Nani and Nazriya, solid supporting cast, good comedy, and neat emotions are basic assets. Barring the slow start, this film will immerse you in its well-executed proceedings and also gives a message that loves comes before the caste, religion, and everything else. Go for it.