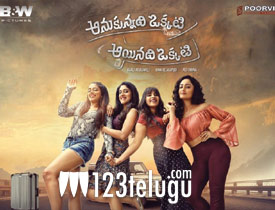 Anukunnadi Okkati Ayinadi Okkati is a film that has some glamourous heroines doing lead roles. Touted to be a suspense thriller, let’s now see how the film turns out to be.

Four close friends played by Dhanya Balakrishna, Komali Prasad, Tridha Chowdary, and Siddhi Idnani head to Goa to attend their friend’s wedding. There, all the girls get high and decide to hire a stripper. When everything seems to be going fine, a twist in the tale arises and the girls accidentally kill the stripper. The rest of the story is as to how they get out of this mess.

All the girls have done well in their roles and look glamorous. Dhanya Balakrishna is good in her loud role and is a key factor in the film. Siddhi Idnani looks cute with her innocent looks and plays her part well.

Tridha Chowdary supported the other girls well but the best of the lot was Komali Prasad. Her role was bold and Komali’s comedy timing was spot on. Her performance creates an interest in the film.

The last half an hour has decent fun as the twists that come have been handled well. Sameer was good as the cop and Bigg Boss fame Himaja evoked a few laughs with her stammering act.

The film has a decent story but it should have been established in an even better manner from the beginning. There was no need to make the proceedings silly in several areas just to evoke comedy for the mass audience.

Things could have been kept serious between the girls once they commit a murder but that does not happen as things are shown a bit over the top and too easy. This is where the tempo in the second half drops down.

Music of the film is below par as some good songs would have made things easier. The locations of Goa have not been utilized properly. The BGM is decent and so was the camera work in the film. Dialogues are fun and are aimed at single screens.

Coming to the debut director Balu, he has written the story keeping the ladies point of view. How four carefree women take charge in life and get into problems. He has added the needed comedy and his work is impressive in the last half an hour. If he made things a bit more serious by creating good emotions between the lead artists things would have been even better.

On the whole, Anukunnadi Okkati Ayinadi Okkati is a thriller which has some fun moments here and there. The film lacks emotional connect and is aimed at single screen audience who look for good eye candy. The heroines lead from the front and provide that and make this film a time passes watch this weekend.