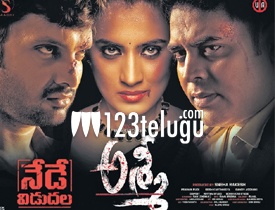 Continuing the trend of reviewing low-budget films, yet another film that has hit the screens is Asmee. Let’s now see how the film turns out to be.

Asmee is locked in a room for four years long. She is brutally tortured and this breaks her mentally. After escaping from the situation, Asmee finds out that Rajesh(Keshav Deepika) is the man behind all this. She kills him but to her bad luck, she finds out later that a man named Siva(Raja Narendra) is the actual culprit. What will she do now? and how will she handle this crazy situation is the whole story.

Rushika Raj plays the female lead and she has done an astounding job in her role. The pain, trauma, and emotional outbursts she showcases were so good to see. We will in fact feel her pain while watching her perform.

One of the biggest drawbacks of the film is the lack of a proper supporting cast. The makers wrapped up the film with just a few artists and because of this, the screen looks empty and lacks depth.

Though the bold scenes are good, they are way too many. As the story was good, the director had a good scope to elevate the scenes but he failed to do it. The crunch kidnap scene has also been dragged to no extent. The key twist in the pre-climax is also just about okay.

BGM of the film is impressive and so was the gritty camerawork. Coming to the director, he has written a good story but failed to create even better suspense. This is the drawback and takes the film down in no time as well.

On the whole, Asmee is a film that has a sensitive subject and a solid performance by Rushika Raj. But a dull narration and lack of gripping elements take this film down. All those who like female-oriented scripts can watch this film but with reservations.