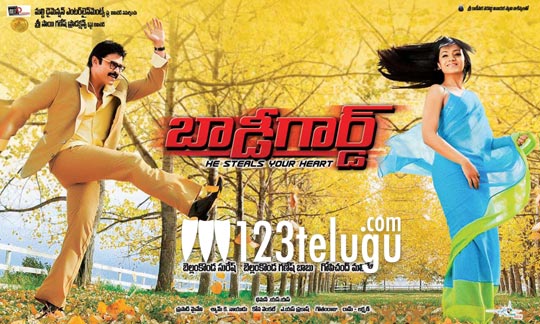 Victory Venkatesh and Trisha are going to entertain you soon with ‘Bodyguard’. The movie has been directed by Gopichand Malineni and Bellamkonda Suresh is the producer. The audio album was launched yesterday at Shilpa Kala Vedika. Music has been scored by Thaman. Let us see how the songs are.

This is the title track of the movie and it is a very energetic number. This is a classic hero introduction song and the song is rendered with terrific energy by Baba Sehgal. Rahul Nambiar and Ramya lend good support. Bhaskarabatla Ravi Kumar’s lyrics are apt for the occasion. Thaman’s music is dominated by the synthesizer and drums. The song is easy to listen to and will be a good watch on screen.

This is a romantic duet and Anantha Sriram has penned the lyrics. Rahul Nambiar has done a good job with the vocals but

Sri Vardhini is simply outstanding. There are many subtle variations in her performance and it is nice to listen to. Thaman’s music is good, but one does get the feeling that the music sounds a little familiar. Overall, a good song to listen to and ample scope during picturization for Venkatesh to come up with his trademark walk behind the heroine in exotic foreign locales.

This is a song where the heroine laments about the stubborn and cold nature of the ‘Bodyguard’.

This song will be set on the heroine and her friends with Venkatesh probably providing some tough poses in the background. The lyrics penned by Anantha Sriram are good and humorous. Geetha Madhuri and gang have done a good job with the vocals. The song will look good on screen and you can expect a slightly humorous picturization. Thaman’s music is ok and once again, it is heavy on the synthesizer and percussion instruments (like drums)

This is a solo number that is rendered well by Karthik. The song is about the hero’s confusion and eagerness to find out the identity of the anonymous woman who keeps calling him over the phone. Sri Mani’s lyrics are good. Thaman’s music is adequate and does the job. Decent song overall.

This almost sad romantic duet starts of well with a beautiful hum. The vocals are taken care of well by Haricharan and Hanini. Hanini’s voice is soft and melodious and is perfectly suited for the occasion.

Rama Jhogayya Sastry’s lyrics are decent. Thaman’s music is adequate. Nothing spectacular. The song is ok to listen to.

This is a short 2 minute number that has a superb performance from Shwetha Pandit. The song describes the heroine’s sadness at the turn of events and her inner turmoil. Thaman and Haricharan lend good support. Music is dominated by the synthesizer. The song will most likely be used as a filler during some key sequences in the film.

This is an album that is pretty decent but if offers nothing spectacular or outstanding for the listener. The songs will just about complement the movie, but they do not have the power to elevate it. Thaman is getting repetitive and his music is dominated by the synthesizer and percussion instruments (drums etc). Unless he gets in more variety, his music will start getting monotonous. The songs have been nicely set up for a trademark Venkatesh style of picturization. The title track ‘Bodyguard’ and ‘Hosannaa’ are my picks from this album.