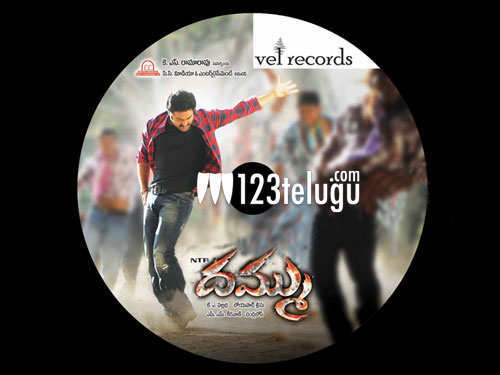 Young Tiger NTR is going to hit the screens this summer with his mass entertainer ‘Dhammu’ and the audio album of this movie has been launched today (29th March) at a star studded ceremony in Shilpa Kala Vedika. Music has been composed by Keeravani and lyrics for all the songs have been written by Chandrabose. Let us see how the audio album is.

This is an out and out mass number that has been rendered with great energy by Baba Sehgal. The song is aimed at the front benchers and expect

some incredible dances from NTR for this number. The song grows on you with time and with good picturization, this number has the potential to be a big hit. Chandrabose’s lyrics do the job and Keeravani’s music is perfect for the mood of the song.

This is undoubtedly the highlight song of the album. The number starts off with a very unique chant of the hero’s different facets.

The tempo slowly builds up and all of a sudden, Keeravani’s rousing score erupts onto the scene, creating a very strong impact on the listener. Geetha Madhuri’s vocals elevate the song to a new level. Sources say that this song has been picturized quite spectacularly and movie lovers are in for a treat. Superb stuff from Keeravani.

This is a classic village celebration song where the people celebrate the homecoming of their favourite leader. Chandrabose’s lyrics are aimed at

elevating the image of the hero’s character and they work. Keeravani and Krishna Chaitanya are ok with the vocals. Music is a mix of rustic tunes and modern instruments. Expect a very colourful picturization with lots of flowers flying about in the air.

Vastu Bagunde is a vintage Keeravani mass number. Instantly likeable and highly energetic, this song is likely to feature some incredible

dance moves from NTR. This is the song which has 4 heroines and you can safely expect a very commercial picturization for this number. Chandrabose does an ok job with the lyrics and the vocals are rendered with good energy by the singers. But the biggest asset for the song is Keeravani’s music.

Once again, this title track is aimed squarely at the front benchers. The tunes are earthy and the lyrics are extremely rustic, lending a very folkish

feel to the song. Chandrabose’s lyrics act as fillers and they have no rhyme or reason. Keeravani’s tunes give ample scope for a highly energetic dance sequence. Nothing extra-ordinary, but not bad.

During the audio function, ace director S.S.Rajamouli had this to say about Dhammu audio album. “It has been a long time since we have had a 100 % commercial mass album. Dhammu is the answer to that”.  That perfectly sums up Dhammu’s audio track for you. Boyapati Sreenu and Keeravani have come out with an audio album that is very clear about the movie’s intentions. This is a solid commercial album and the songs are energetic, catchy and aimed at sending the front benchers into a delightful frenzy. ‘Ruler’, ‘Vastu Bagunde’ and ‘Raja Vasireddy’ are my favourites. Looks like NTR has a winner on his hands.