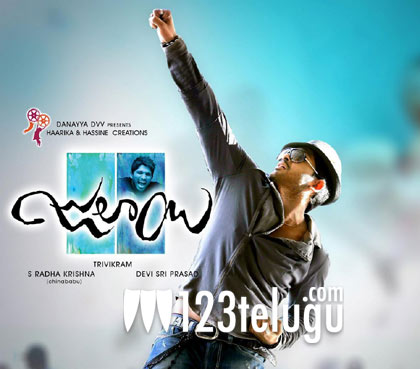 The audio launch of Stylish Star Alli Arjun’s ‘Julayi’ was held at Novotel yesterday in a grand function that was attended by Powerstar Pawan Kalyan. Devi Sri Prasad has scored the music for this movie and Trivikram Srinivas is the director. Because of the successful combination of Allu Arjun and Devi Sri, expectations over this album are quite high, so let us see how it is.

This is a breezy title track with good performances from Suchith Suresan and Priya Hemesh. Ramajogayya Sastry has come up with interesting lyrics for this track and they go very well with the theme of the film. Devi Sri’s music is peppy and lends the whole song a very youthful feel. Expect some superb steps from Bunny in this number and a very entertaining picturization. Thumbs up for this track.

After delivering blockbuster lyrics for ‘Pilla’ song in ‘Gabbar Singh’, Devi Sri has tried his hand in the lyrics department once again for this number and the results are good. Adnan Sami renders this melodious number beautifully and with a lot of feel. Devi Sri’s music is nicely romantic and complements the song beautifully. A few retro beats in between add to the special experience. Without a doubt, this will be the favourite track of the album for many. Full marks to DSP and Adnan Sami

This is a trademark Allu Arjun album and you cannot imagine any other hero for this number. The vocals, the tunes and the overall feel of the song are tailored for Allu Arjun. Jessie Gift renders this song with good energy. The song has a slightly mass feel to it and Srimani’s lyrics are in tune with this. DSP’s music is ok here and this song will take some time to get used to. Expect some energetic mass steps from Allu Arjun for this number.

This is a formula duet number that starts off interestingly with a small rap rendered by Sucharan. Tippu and Megha take over from there and they do a decent job. Srimani’s lyrics are strictly average and they just act as fillers. DSP’s music is routine and there is nothing exciting here. This song is purely a formula filler for the masses and will not attract much attention.

This is an incredibly foot tapping number that will get fans and C center crowds onto their feet on release day. Srimani’s lyrics are simple and have a very rustic feel. Sagar and Ranina Reddy render the vocals with good energy and enthusiasm. DSP’s music is perfectly in sync with the mood of the song and the mass beats are catchy. Expect some sensational steps from Allu Arjun for this number. Overall, a nicely addictive track that will work for both classes and masses.

Pakado Pakado is a number that will most likely be used as a background song or as a club song in a very key moment of the film. Malgudi Shubha renders the song in her trademark style and DSP fills in for the male voice. Ramajogayya Sastry’s lyrics are nothing to write home about here. Music is fast paced but nothing special. Overall, this song will work in the film if the visuals are arresting, but for listening, it is strictly average.

DSP and Allu Arjun have teamed up quite successfully in the past and this current album ‘Julayi’ has some pretty good tracks as well. Coming immediately after the smash hit ‘Gabbar Singh’, expectations are sky high over DSP’s work and he has managed to deliver a decent album. My picks from the album are ‘Oh Madhu’ , ‘Julai’ and ‘Mee Inti Mundhu’. Allu Arjun is a terrific dancer and he has some good tunes in this album to showcase his potential. We will have to wait and see if Trivikram can elevate these songs to a new level with his picturization.