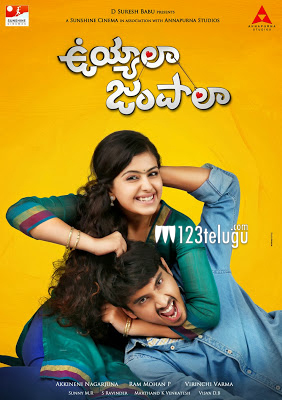 The small film ‘Uyyala Jampala’ is making a big buzz in the industry. With two big production houses behind the film and a positive word of mouth, expectations are growing on this project. The film’s audio album is out now and Sunny M.R. scored the music. Let us check out the songs of ‘Uyyala Jampala’ and see if they can live up to the hype

This title track is a very soft and melodious number. In fact, it is almost like a lullaby. Harshika Gudi’s voice sounds very fresh and she is supported well by Anudeep Dev. Full marks to Sunny for coming up with a musical score that stays in the background, without drowning out the vocals. The guitar is the predominant instrument that can be heard. This is a song that will grow on you with time. Thumbs up for this number.

This lighthearted song has good vocals from Harshika, Bindhu and Deepu.While the lyrics are quite ordinary, the singers have managed to elevate the song with energetic performances. Sunny’s music comes across as a fusion of reggae and soft rock. The saxophone and trumpet are the predominant instruments that can be heard,along with the snare drum. Overall, a decent song.

This song starts off with some soothing violin notes and they make way for percussion instruments and the guitar quite seamlessly. Harshika has done a good job with the vocals and she is ably supported by some good lyrics from Vasu and Rambabu. Music has a very soothing quality, with good guitar work dominating the proceedings. Like other songs in the album, this number will grow on you with time.

Sunny MR has lent his voice for this song and he has done an ok job. Perhaps, a professional singer would have done greater justice to the song. Vasu Valaboju’s lyrics are quite soulful. When it comes to the music, the guitar dominates the proceedings while the flute can be heard faintly once in a while. Overall, a pretty decent number.

This is the Hindi version of Mana Bandham and Arjith Singh’s voice suits the mood of the song quite well. Perhaps, the Telugu version should have been sung by him as well.

Sunny MR made a good impression with ‘Swamy Ra Ra’. His fresh tunes and innovative use of instruments brought him recognition for that album. With ‘Uyyala Jampala’, Sunny now has another good album on his hands. ‘Uyyala Jampala’ has some very pleasant and soothing tunes. There are no mass chartbusters. But then, that is not the aim of this album. Give this album some time and the songs will grow on you.