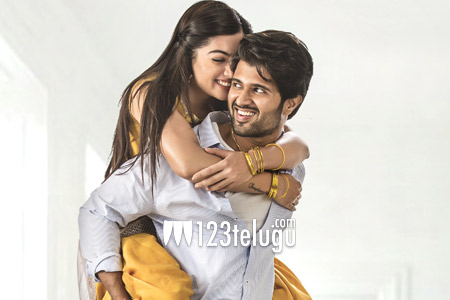 The complete audio of Geetha Govindam is finally out in the open. Composed by the talented Gopi Sundar, let’s now see how this album turns out to be.

Analysis: The album starts off with Inkem Inkem Kavale which is already a blockbuster all over. There is some magic about this song as the unique singing of Sid Sriram holds your attention right away. From the traditional tune to the way it has a contemporary beat, everything clicks with this song and icing on the cake are the melodious lyrics by Anantha Sriram which showcase the happiness of hero in a simple and romantic way.

Analysis: The second song on the album is Yenti Yenti sung by the super talented Chinmayi. She makes this song her own and brings out the excitement and love of the heroine in a superb way. Even though the song starts on a normal note, the hookup lines are set so nicely that the song grows on you completely. Gopi Sundar once again uses typical Indian beats and makes this song a winner.

Analysis:  Moving on, the third song in the album is Vacchindamma which is a cute montage number which has class written all over it. What’s even more interesting is the amazing chorus which gives this song a traditional yet romantic feel. Sid Sriram’s unique voice is an asset for this number which will be a bigger hit once the audience sees it on screen. Lyrics by Srimani is yet another bonus which speaks about the heroine in a dignified manner.

Analysis: The fourth song is the controversial What the Life whose lyrics have been changed from the What The F. Vijay Devarakonda has himself sung this song and does a below par job. The lyrics are women bashing and the tune is quite dull and does not make the song happening. Only the impressive visuals should help this song which is ordinary.

Analysis: The last song in the album is Kanureppula Kalam which is sung by musician Gopi Sundar himself. A sad montage number which reveals the heartbreak of the hero. The tune is simple and Gopi Sundar’s singing is just about okay. Music wise or energy-wise, the song does not create that pain which is needed and is a below-par number to wrap up the album.

So much was expected of Geetha Govindam’s album after Inkem Inkem became a rage. Gopi Sundar’s composition of romantic numbers is great, but the other two numbers are just okay. Inkem Inkem, Yenti Yenti, and Vacchindamma are our picks and looks like they are enough to lift the film during its release time.