Review : Avanthika – No horror no comedy 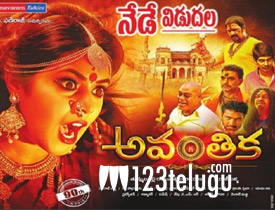 Following the trend of horror-comedies, yet another film, Avanthika has hit the screens today. Let’s see how it is.

Avanthika (Poorna) is an innocent village girl who has big dreams in her life. Cashing on that, a politician (Ajay Ghosh) ends her life with the help of a Baba(Sayaji Shinde) for his own benefit.

The actual story begins when a guy named Sreenu(Sri Raj) shifts to the same apartment where she is killed. What situations will Sreenu face there? When will Sreenu get to know about Avanthika’s presence in the apartment? Is there an evil spirit involved in all of this? To know the answers, you need to watch the film on the big screen.

Poorna is impressive in her village girl’s look and gives a good performance as the ghost. Heroine Geetanjali as Malli is decent in her role. A romantic duet which comes during the first half looks good. The natural locations showcased in the song are too good.

Though the director Sri Raj has chosen regular horror-comedy, he miserably failed in his execution. The film starts on a flat note and continues until the end with the same tempo. It does not have any engaging scene and noted actors like Ajay Ghosh and Sayaji Shinde are wasted completely.

The heroine has a very limited role in the film and looks helpless most of the time. Sri Raj’s screenplay is disappointing and so was his narration. Both the halves have nothing much to offer and bore the audience to no extent.

Director Sri Raj played a safe game by picking up a horror-comedy but failed badly in the way he narrated things. All the scenes that he showcases are routine and quite predictable. Editing work by Siva Y Prasad is good and he succeeded in keeping the film’s run-time quite crisp. Camera work by Karna is okay as he captured the natural locations very well.

Music by Ravi Balla is decent and his old age music and instrumentation used in the second song will impress the audience. Production values are okay for this low budget film.

On the whole, Avanthika is an outdated and routine horror-comedy with flat narration till the end. Comedians Dhanraj and Shakalaka Shankar evoke a few laughs in this film which has nothing much to offer and can easily be skipped this weekend as you might have better things to do.