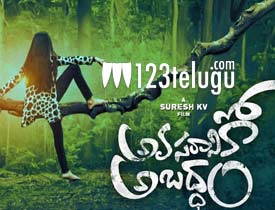 Debutant director Suresh K.V is testing his luck with a horror drama Avasaraniko Abaddam. The film which stars all newcomers has hit screens today. Let’s see how it is.

Half way through their journey in the forest, they start experiencing some weird activities involving a ghost. Left with no choice, they continue their journey but to their bad luck, things start getting worse for them. Rest of the story is to how these friends successfully come out of this dreaded jungle.

First of all, director Suresh K.V. should be appreciated for choosing an interesting script for his debut film. Though the film starts off as a regular horror flick, slowly it picks up the pace and become a suspense thriller.

Especially things in the second half get intriguing and keep the audience hooked. All the actors play their roles well even though they are newcomers. Some of the thrilling scenes have been elevated nicely with the superb background score of Sai Karthik.

Being a horror film, there are barely any horror scenes in this movie. Though the director had an interesting episode to execute it, he failed in doing so.

One would wonder why the makers had titled this film Avasaraniko Abaddam as there is no connection to the story with the title. Things go out of place in the pre-climax and confuse audience to the core.

Director Suresh makes a decent debut. The way he adds some interesting scenes in the first half are good. Cinematography by Venkataramana was ok but editing could have been done better by Karthik Srinivas. Production values are just about okay and so was the art direction. Camera work looks realistic as the forest visuals have been showcased well.

On the whole, Avasaraniko Abaddam has its share of decent moments. Some interesting twists and thrilling scenes here and there are basic assets. On the flip side, lack of engaging elements during the second half and a slow pace manage to spoil the proceedings and make this film strictly an okay watch this weekend.