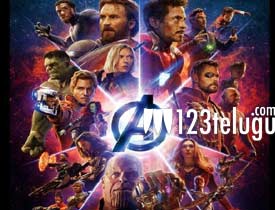 Avengers: End Game, the final outing from the highly celebrated Avengers franchise hit the theaters across the globe today. The action entertainer has a lot riding on it and the earth-shattering advance bookings are a testimony of the same. Scroll down to check whether the film manages to reach the sky-high expectations laid upon it.

Avengers come to know that they can undo the humongous damage caused by Thanos if they can use quantum physics to go back in time and collect all the infinity stones. However, this path is treaded with unprecedented challenges, which can eventually wipe out the entire human race, if not executed properly.

Just when everything seems to be going as planned, Thanos re-enters the scene and the Avengers will now have to get the better of him to achieve what they want. Will they be successful in the process? What are the challenges they have to overcome? The answers to these questions form the plot of the film.

Avengers: End Game banks mainly on the emotional journey of the lead characters and that is portrayed exceedingly well. The audience will connect with the characters on a personal level and that is surely the biggest asset of the film.

The last hour of the flick is the real deal as the audiences are put through an emotional rollercoaster. A particular sequence where all the superheroes make their way back to Earth is goosebump-inducing.

For some odd reason, the directors take a lot of time to get things going in the initial stages. The first 20 minutes are flat and there is nothing much going on. The time travel heist in the first half is a tad confusing. However, things get slightly better in the second half.

The directors, Anthony Russo, and Joe Russo set their focus on getting the emotional connect right and they succeeded in this department. However, they should have concentrated more on the screenplay in the first half.

The background score is just brilliant and elevates most scenes to a whole new level. The camera works are good and so were the graphics and CGI works. Coming to the Telugu version, the dubbing is neat. A number of Telugu movies’ references have been used to keep the native audience hooked.

On the whole, Avengers: End Game is a fitting finale to the remarkable franchise. It gets off to a slow start but gains momentum towards the end of the first half and the last hour is the real standout and gives goosebumps for the audience. The film will be loved by the followers of the franchise and in that process break several records at the box office. Must Watch.