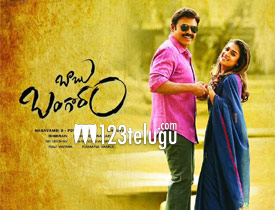 It has been quite some time since we have seen Victory Venkatesh in action. After a long gap, he is back with a commercial entertainer in the form of Babu Bangaram. Directed by Maruthi, this film has hit the screens today and let’s now see how it turns out to be.

Sailaja (Nayanthara) is the daughter of an accused (Jayaprakash) who is on the run. This is the time when ACP Krishna(Venkatesh) enters the scene and starts getting close to Sailu.

In this process, he also falls in love with her but to his bad luck, Sailu finds out that Krishna has done all this only to arrest her dad. Things get upset between the couple and they break up with each other.

Rest of the story is as to how Krishna gets serious with his investigation and catches the culprits and wins his love back.

Venkatesh is one of the biggest highlights of the film. After a long gap, he makes a stunning comeback in his trademark funny role. He is amazing as ACP Krishna and evokes superb laughs. The way he has showcased variations in his role during the second half and climax look supremely good.

Nayanthara looks stunning in the film. More than the performance, it is her looks that catches your imagination here. Her chemistry with Venky is awesome and looks quite refreshing. Songs have been shot nicely as both the lead pair look stunning on screen. First half of the film has ample entertainment.

30 years Pruthivi is hilarious as Battayi Babaji. All his scenes with Venky and Nayan have been executed well in the first half. Maruthi has designed a superb role for him and he brings the house down on fire.

The story of the film is quite routine and has nothing much interesting to offer. Maruthi just plays around with Venky’s stardom and tries to reintroduce him in a central role which looks just about okay at times. Brahmanandam fails to entertain in his role.

Most of the second half gets too serious and has no novel elements. Posani tries to salvage things with his comedy but matters get slightly boring during this time. The film is hugely predictable and you can know the twist right after the first half itself.

Production values are very good and so is Ghibran’s music. Maruthi’s screenplay is neat as he takes a routine story and narrates it with enough fun. Dialogues have been written with a lot of wit and work well with characters of Venky and Pruthvi. Camera work is stunning and showcases the film in a superb light.

Coming to the director Maruthi, he has done a decent job with the film. He extracts superb performance from Venky and showcases him in different shades. While he executes the first half in a hilarious way, he makes the second part a bit serious. However, Maruthi score heavily as he ends the last fifteen minutes with some good dose of comedy and brings vintage Venky back.

On the whole, Babu Bangaram showcases Venky in yet another interesting role after a long time. Venky’s performance in various shades and decent comedy during the first half are huge assets. But the film takes a back seat during the second half as things get a bit serious. However, Maruthi deals things cleverly and ends the proceedings on a interesting note. Finally, If you keep your expectations in check and ignore the routine story line, you can happily watch this time pass entertainer with your entire family.