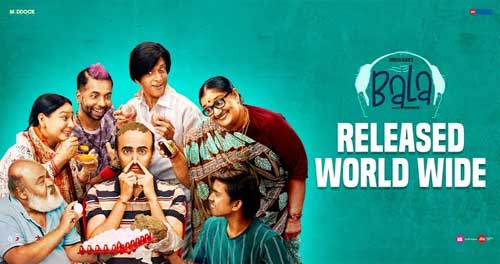 So, continuing the series of reviewing movies and suggesting shows during the lockdown period, our today’s pick is Ayushman Khurrana’s witty entertainer Bala. The film is available on Disney Hostar.

Balmukund(Ayushman Khurrana) is a 25-year-old man who is suffering from heavy hair loss and diabetes. He tries everything to get his hair back but fails time and again. So, he starts wearing a wig and woos Pari Mishra(Yami Gautam). The couple gets married and on the second day of his wedding, Pari comes to know that Bala is bald and leaves him for good. The rest of the story is as to what happens in Bala’s life after this tragic break up.

The concept of the film itself is pretty good and is quite relatable to many who have hair loss. Ayusman Khurrana is commendable as the young guy with low self-esteem and confidence. The comedy generated through the hero’s baldness is hilarious in the first half. The chemistry between Ayushman and Yami Gautam and their Tik Tok track is also very good. Bhumi Pednekar is amazing as the lawyer who fights racist issues. The climax of the film is emotional and has been ended with proper justification regarding balding.

The second half of the film is a bit slow and becomes a big serious. The heroine loves the hero to death but leaves him because he is bald. All these scenes could have been shown with proper justification.

Overall, Bala is one of those fun films which has everything in it. The subject is universal and upon that, Ayushman Khurrana kills it with his solid act as Bala. Barring the slightly slow second half, this film ends as a good entertaining watch during this lockdown. You will surely enjoy it.