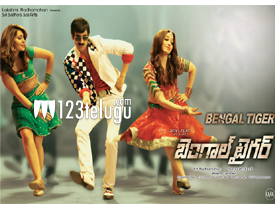 Bengal Tiger is a very important film for Ravi Teja as his previous film failed at the box office big time. Directed by Sampath Nandi, this film has Tamannah and Raashi Khanna as the female leads and has hit the screens today. Let’s now see whether this film gives Ravi Teja a much needed hit in his career.

Aakash(Ravi Teja) is a happy go lucky guy who dreams of making it big. He targets a state minister(Sayaji Shinde) and some how joins him. Slowly and steadily, he moves ahead in life and manages to become the right hand of the home minister (Rao Ramesh). Seeing his charm and wit, the home minister’s daughter(Raashi Khanna) falls in love with Aakash.

Things change over night and the home minister decides to announce his daughters wedding and invites the chief minister(Boman Irani). Right at the time when the wedding announcement is going to be made, Aakash gives a huge shock to both the home and chief minister.

What is that shock ? What does Aakash have to do with the Chief minister? What is his actual plan ? and where does Tamannah feature in all this set up forms the rest of the story.

Once again, Ravi Teja proves that he is a master at creating mass entertainment. He is superb in the film and gives an all round performance. Credit should go to Sampath Nandi for showing him in such a good role. The way he has highlighted Ravi Teja in all the action episodes and thrills is very good.

Fist half of the film is hilarious with ample entertainment. Everything works big time and the director has made sure that his story line is showcased in an entertaining way. Raashi Khanna ups her glamour quotient and suits her character supremely well. Her acting capabilities have also improved and she surprises us in her bikini avatar.

Major highlight of the first half is 30 years Pruthvi. This talented comedian is slowly making a habit of giving superb performances with every film. He along with Posani and Ravi Teja evoke super comedy during the first half. Interval bang has been handled supremely well and surprises the audience. Some fights and emotional scenes in the second half have been executed well.

In every Ravi Teja film, entertainment is a huge asset and that is missing a bit during the second half. Not that the second half is bad, there is not much entertainment as the film moves on a serious conflict of interest between Boman Irani and Ravi Teja. Surprisingly, Tamannah has nothing much to do and appears only for song and dance.

Routine scenes, flashback episode and the hero with a tainted past, everything goes on a predictable note and spoils the fun during this time. Also, the songs spoil the mood of the film in the second half as they come at regular intervals.

Even though Raashi sizzles in a bikini, there was absolutely no need of this as she should have saved her act for a better scene and film. Ravi Teja looks way too slim in many scenes and seriously needs to get back his weight.

Bengal Tiger is high on technical aspects. Camera work is superb and showcases the film in a good light. Production values are top notch as the makers have not compromised on the rich content in the film. Special mention should go to Ram Lakshman for composing fights in an interesting way. Music by Bheems is pretty impressive and the signature tune in the background score elevates the film to a decent level.

Coming to the director Sampath Nandi, he does a decent job with the film. He induces ample entertainment and sets up a racy first half. Sampath’s screenplay is good but it slightly gets predictable during the second half. Even though the story chosen by him is routine, the way he has narrated the film is decent. Had he added some more entertainment in the second half, the output would have been even better.

On the whole, Bengal Tiger is a typical Ravi Teja mark entertainer. A full on entertaining first half, glamour quotient and well executed mass elements are huge assets for the film. If you manage to go in well prepared for a serious and emotional second half, Bengal Tiger will end up as a comfortable watch this weekend.