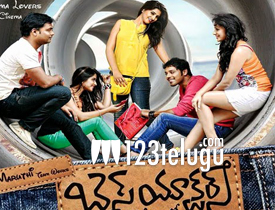 Starring a bunch of upcoming actors like Nandu, Madhu, Abhi and Naveed, ‘Best Actors’ is a full length comedy thriller which has hit the screens today. Let’s see how it is.

The film deals with the story of four close friends Nandu(Nandu), Madhu( Madhu), Abhi(Abhi) and Krishna(Naveed) who decide to go on a holiday trip to Goa. After reaching there, both Nandu and Madhu spot two enticing beauties Jaya Sudha (Madhurima) and Jaya Pradha (Kesha Kambhati) and start wooing them.

Twist in the tale arises when these girls reveal that one of them is suffering with a lethal sexual disease which has been deliberately transmitted to one of the two friends.

Who are these girls ? What is their actual motive ? and Who among Nandu and Madhu will succumb to death because of this deadly disease forms the rest of the story.

Comedy is the major attraction of the film. The initial half an hour is quite entertaining as some hilarious scenes involving Sapthagiri have come out well. Thagubothu Ramesh manages to evoke decent laughs in the end. The interval bang is decent and some twist revealing scenes during the climax are showcased well.

Nandu is the show stealer and displays superb emotions. He performs with a lot of ease and is the main stay of the film. Performance by the other supporting cast is also good. All the female leads have done justice to their roles and their glamour quotient is a huge advantage to the film.

After the initial half an hour, the comedy track looses its charm and unnecessary punch dialogues fail to impress the audience. Even though the film has a thrilling twist, rest of the movie is just dragged way too long and gets boring after a point.

The predictable nature of the script is also a huge setback for the film. This type of stories have been dealt many a times in the past. There is no chemistry between the lead pair and their emotional scenes lack intensity.

Direction by Arun Pawar is mediocre as his predictable narration fails to keeps things interesting. Screenplay is not perfectly executed. Cinematography by Vishwadev Battula is neat and colourful. Music and background score given by Jeevan Babu(JB) is good. Dialogues written by Kittu are Ok and editing by Uddhav S.B. is not up to the mark. The production values are nice as the makers have not compromised in any segment and bring a quality film for the audience.

On the whole, Best Actors has got certain interesting moments going its way. Comedy episodes during the beginning, interval bang and climax are the basic plus points. But the routine story line, predictable narration followed by some dragged out scenes remove the freshness out of the film which can be watched when it comes on TV.