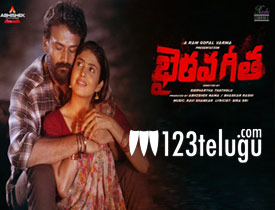 RGV has been promoting Bhairava Geetha quite aggressively from the past few days. After being postponed twice, the film has finally hit the screens today. Let’s see how it is.

Geetha(Irra Mor) belongs to a family with a hardcore faction backdrop. After finishing her studies, she comes to her village and falls in love with one of her dad’s henchman Bhairava(Dhanunjaya). This does not go well with her dad who orders his goons to kill Bhairava. Left with no choice, Bhairava elopes with Geetha and things become even more problematic. The rest of the story is as to how the young couple fights all the atrocities and succeed in love.

Even though the story is old, the premise in which it is set looks good. The Rayalaseema backdrop is nicely elevated during the first half an hour and things are shown brutally as to how the downtrodden and low caste people are treated in that area.

Kannada actor, Dhanunjaya does a neat job in his role. In the first half, he looks a bit lost in the entire setup but turns violent and emotes nicely in the second part. Heroine Irra Mor looks beautiful and gives the audience a feast with her ample skin show.

The actor who played the role of Katta Reddy was top notch. The interval bang and some thrills in the first part are good and create a devastating effect on the viewers.

One of the biggest minus points of the film is the excess of violence. During the first half, these so-called action sequences look good and create a good effect. But once the second half starts, it becomes repetitive and overexposure of blood and gory become irritating for the audience.

The love story does not blossom at all as everything happens all of a sudden and this is where the film goes down. Too much of racism and cast feeling is shown in the film which can be put of for many.

The film has similarities with Venkatesh’s Chanti and storywise does not excite you at all. After all the bloodshed and drama, one would wait for a gripping climax but everything is ended in a jiffy.

As all RGV productions, Bhairava Geetha is also top notch in its technical values. The camerawork needs a special mention as the Rayalaseema set up and the barren lands have been showcased in a spectacular manner. Especially, those drone shots were too good. Background score in the first half was good but things get way too inspired by Baahubali and Transformers’ soundtrack. Dialogues are neat and the dubbing done by Azia Nasser for the heroine’s father is very good.

Coming to the director Siddhartha, he makes a below-par debut. Even though he chooses a routine plot, he sets the tempo well in the first half and ends it on a good note. But once the second half starts, he runs out of ideas and shows the same action scenes between the rich and the poor. Suddenly, the weak hero becomes so powerful and everything changes into his favor in the climax which looks forced.

On the whole, Bhairava Geetha is the same old faction drama which offers nothing new. The first half has some breezy moments but the film takes a beating in the second half with an overdose of violence and forced climax. The performances from the lead cast create a decent effect but the narration is jaded and that effects the cinematic experience for the viewers and ends the film as a below-par watch this weekend.