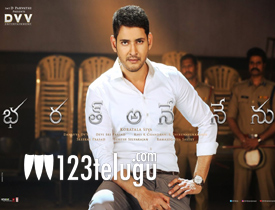 Bharath Ane Nenu is one film which has been eagerly awaited all over. This film marks the collaboration of Koratala Shiva and Mahesh Babu after the blockbuster hit Srimanthudu. Amid massive craze, this film has hit the screens today. Let’s see whether the film lives up to its expectations or not.

Bharath(Mahesh Babu), who graduates in the UK hears about the sudden death of his father(Sarath Kumar) who is the chief minister of the state. Leaving things behind, he rushes back to India. Upon his arrival, he is forced by his uncle(Prakash Raj) to fill his father’s shoes as the chief minister of the state. Bharath takes up this deadly challenge only to find out several loopholes in the system. Rest of the story is as to how Bharath operates in his own style as a CM and brings a good change in the society.

The first thing that hits you right away in Bharath Ane Nenu is the scale and premise of the film. It has been quite some time that we have seen a political thriller which had a mainstream hero playing a CM. The manner in which the story unfolds by covering major social issues has been conceived in a spectacular manner.

Mahesh has given his career best performance which is truly award winning. The honesty, dedication and the command that Mahesh generates as CM takes the film to another level altogether. Mahesh not only looks super handsome as the young CM but also mouths terrific mass and political dialogues with aplomb.

Kiara Advani makes a staggering debut and fits her role perfectly. Not only does she look gorgeous but performance wise too, she has done a superb job. She is surely a star in the making and will go a long way in Tollywood. Seasoned actors, Prakash Raj and Rao Ramesh bring a lot of depth to the film with their terrific supporting act.

The interval bang is terrific and sets the tone for the second half in a stunning manner. The emotions showcased during the second half work well. Also, the manner in which certain key social issues like education, traffic and village administration have been showcased, looks quite good. Production values of the film are terrific and Devi’s background score makes things even more gripping. The film has enough mass elements in the second half which will make the fans quite happy.

When compared to the first half the second half gets a tad slow during the end. The last ten minutes of the film is quite routine and predictable with nothing much great happening during this time.

The length of the film is also a tad long and all those who expect fun and comedy will get disappointed as the film is a serious political drama.

DVV Danayya has gone all out for this film and every penny spent looks amazing on screen. Special mention should go to the assembly set which looks spectacular on screen. The way it has been lit gives a rousing effect to the proceedings. Camerawork by Thiru is too good as he has showcased the political set up in quite a realistic manner. The film looks quite rich in every frame and the manner in which the proceedings are showcased give an earthy feel to the film.

Devi Sri Prasad is a huge asset to the film. The way the theme song is composed and goes with the proceedings of the film speaks volumes of Devi’s talent. But more than his music, it is his background score which takes away the cake as it thrills you completely and keeps you hooked to the proceedings. Dialogues need a special mention and especially those written for Mahesh have a lot of value and are clap worthy. Mahesh’s look has been designed quite well.

Coming to the director Koratala Shiva, he always saves the best for Mahesh. Credit should completely go to him for penning a story like this and showcasing Mahesh in a never before seen manner. The way he handles the social issues and keeps all the mass elements intact for fans showcases his worth as a director. His grip on emotions and the way he shows Mahesh as the young CM looks quite convincing. One can easily say that there is no better director who can handle social subjects and once again Koratala proves his class with his film.

On the whole, Bharath Ane Nenu is a highly captivating political drama which clicks from the word go. Credit should go to Mahesh for not only accepting such a script but leading from the front with his career-best performance. Mahesh’s fans will have a blast as the film will do exceptionally well in both the domestic and overseas markets. If you ignore the slightly predictable nature of the film, Bharath Ane Nenu ends up as a terrific summer watch which will break many records at the box office. Must watch.