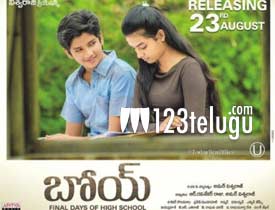 Out of the multiple films that have hit the screens today, Boy is one film which has also made its way. Directed by Amar Viswaraj, lets now see how the film turns out to be.

Mahitej(Lakshya) is a tenth-grade student who is always bullied by his friends. In one of the crazy incidents, he gets closer to Varsha(Sahiti) and their friendship blossoms into love. During the same time, Mahitej also gets into a mess with his Math teacher(Vinay Varma) because of a crucial issue. What is that issue? How will Mahitej come out of this? That forms the rest of the story.

Young hero Lakshya is impressive in his role of a school going, boy. He is especially good with his dialogue delivery and also danced well in the film. Lakshya’s acting in all the confrontational scenes with Vinay Varma was very good.

The subject of the film is pretty decent as a contemporary problem of how kids suffer in handling certain school subjects have been discussed well. Heroine Sahiti looks beautiful and also did her supporting role well. The actor who played the role of hero’s friend is impressive.

But the real highlight of the film was Vinay Varma who did an excellent job in his role of a Math teacher. His expressions, body language, and emotions worked well in even the dull scenes.

The screenplay of the film is very disappointing and has not been handled well. There are way too many scenes which lack the depth and have been included just for the sake of it. Also, the comedy showcased in the film is irritating and looks forced.

Even though the script had good scope for solid emotions, the director did not make use of it at all. There are many scenes in the second half which look over the top and dramatic and deviate the interest of the audience. After a point in the film, the basic flow in the narration misses and sidetracks the film completely.

Two songs in the film are good but the background score is horrible and irritates you to the core. Production values of the film are very good as the film and its visuals look quite rich and pleasant. The camerawork by Oscar is very good as it shows the youthful drama in a good way. Coming to the director Amar, he has done a below-par job with his narration. His concept looks good on paper but does not have anything gripping for the audience.

On the whole, Boy has a decent concept but its execution is quite disappointing. The lead casts performance is good but the rest of the narration and screenplay go for a toss making this film a painful watch this weekend. Avoid it.