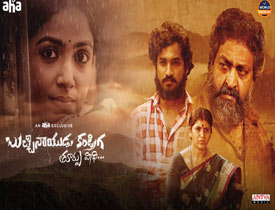 So, continuing the series of reviewing movies and shows during the lockdown period, our today’s pick is the Telugu Bucchinaidu Kandriga. The film is available on AHA and let’s see how it is.

The film is set in the small village of Buchinaidu Kandriga, Chittoor district. The film is a period drama and showcases the love of Balu(Munna) and Swapna(Drishika Chander). Balu is in love with Swapna from a very young age. After a while, even Swapna falls for him and the couple elopes shocking their parents. This does not go well with Swapna’s dad Veeraswamy(Ravi Varma) who is strictly against this match. What does he do and what happens to the couple in due course of time is the whole story of the film.

TV actor, Ravi Varma who plays the heroine’s father is the best of the lot in the film. He is superb as the aggressive father and brings a lot of depth to the film. It is good to see such underrated actors get such good roles. Heroine Drishika is also neat in her role and does well in the last half an hour. She is spot on with her emotions and is impressive.

Hero Munna is neat in his role and shows good variations in different age groups. His performance in the climax is pretty impressive. Care of Kancharapalem fame Subba Rao is amazing as the hero’s dad. The manner in which his track is showcased through the film brings in good emotions.

One of the biggest drawbacks of the film is the story. It is a routine and outdated storyline that you have seen in many films. A young boy falling for a rich girl, her father opposing it, this has been done and dusted in so many films already and this film showcases the same. Barring the last twist and a bit interesting last 10 minutes in the film, the rest of the movie is dead slow and has nothing new to offer.

The director takes so much time to showcase student love and this makes things slow and boring. As he has wasted too much time just to show the love of the hero, he does not have time to show the real love of the girl and how she falls for him. The couple unites in just two scenes and the film moves to the main plot. The local village goons, searching operation and the way the couple hides and marry, all this is so boring and tests your patience.

The film is quite strong technical wise. The production values, the village set up and production design are top-notch in the film. The music by Maahiramsh is amazing and has soothing tunes. The way all the songs are also been shot looks good. Editing is dull as the first hour needs to be trimmed at once.

Coming to the director Krishna, his shot-making, casting, and extraction of performances from his cast is good. He has a decent talent and extracts good emotions as well. But the story he has chosen and the manner in which he unravels the whole proceedings is painfully slow and nothing novel.

On the whole, Bucchi Naidu Kandriga is a village drama that is very routine, slow-paced, and predtictable. The premise is good and performances are decent. Barring the last twist in the end, this film has nothing new to offer and ends as a boring and dull watch during this lockdown period.