Review : Cauliflower – Silly to the core 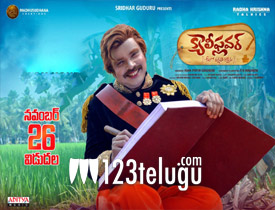 Sampoornesh Babu is ready with one more film called Cauliflower. The satirical comedy is out now and let’s see how it is.

Cauliflower(Sampoornesh Babu) is a 35-year-old man who goes by the strict philosophies set by his grandfather. One fine day, he gets raped by three girls and things change upside down for him. Upset with the rape, he files a case and seeks justice. Who are these three girls who raped him? What is their backstory? and Will Cauliflower get justice? That forms the rest of the story.

The film is a light-hearted comedy and there is no seriousness in it. Sampoo plays his role of Cauliflower sincerely and evokes good fun. His body language is quite funny in the film.

The scene where Sampoo goes naked and protests in front of the assembly, is funny and has been canned well. Posani is good in his role and did his best. The rest of the cast tried hard to make a difference.

It is quite clear that the film is a satirical comedy and there are many scenes that look over the top. But they are shown in excess and this creates a boring factor for the audience.

This film is a silly concept and only those who have an eye for such comedies will like it. The rest will find it so silly and restless. The track of Andy Flower is boring and only obstructs the flow of the film.

After a point, there is no flow in the film as scenes are unleashed in a very haphazard manner. The pace becomes slow and there is no direction in the narration even though it is a satirical comedy.

Production values of the film are just about okay. Editing is pathetic as so many silly scenes could have been edited out. The dialogues are funny though but the music is bad. The director planned and made it like an over-the-top comedy but that also does not click here.

On the whole, Cauliflower is an over-the-top comedy that fails to click. All those who are aware of Sampoo and his comedy can give this film a shot. But for the rest, it tests your patience in a big way.