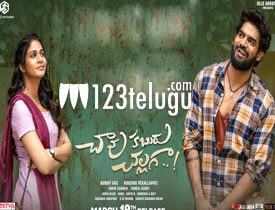 Chaavu Kaburu Challaga is a film that has created a decent buzz for itself. The mass drama is now out in the theatres and let’s see how it is.

Basti Balaraju(Karthikeya) is a van driver who carries dead bodies to burial grounds. One fine day, he spots a widow(Lavanya) at her husband’s funeral and falls head over heels for her. He starts wooing her but fails time and again. This is also the time when Balraju’s mother(Amani) starts liking someone else. This brings a tense atmosphere to the film. How will Balraju deal with this delicate situation and also win his love forms the basic story of the film?

Chaavu Kaburu Challaga is an out and out Karthikeya film. He makes a terrific transformation as Basti Balraju and is superb in his mass role. Karthikeya has improved a lot with his performance and holds the film in all the emotional scenes. The young actor gives a terrific performance in the climax and all the scenes with his mom Amani have been executed well.

Lavanya gets to play a subdued character in the film but does so well in her emotional role. Her looks, body language, and performance in key scenes lift the film. Lavanya’s performance during the interval bang was quite good. Murali Sharma does what is expected but is getting repetitive these days.

Amani makes a strong comeback and is amazing as the hero’s mother. She suits her role well and brings a lot of depth to the film with her settled performance. Srikanth Iyengar is decent in his role and so was Baddham as hero’s sidekick.

The film gets a good life before the pre-interval block and climax. The mother sentiment, justification given to her actions look quite good by the end. The emotions are neat during this time and end the film on a logical note.

The premise of the film is quite unique and it takes some time for the audience to adjust. The hero starts liking the heroine at her husband’s funeral. This might look a bit weird for a section of the audience.

Also, the conflict point of the film is not that strong. The heroine hates the hero for the most part of the film and with just one incident, she falls for him. This looks weird as some more scenes should have been showcased to make the love story interesting.

Also, the film has a haphazard narration. A few good scenes are followed by some boring and routine family scenes. The love story is a bit dull and the director should have etched Lavanya’s character in a more proper manner to make things effective.

Coming to the director Koushik, he has done a passable job in his debut. The story idea is unique and his grip on emotions is also strong. The hero getting trying to get her mother married again looks neat. In handling the emotions, he gives the love story a miss and makes it dull. More scenes related to the lead pair and how the hero makes her fall for him should have been elevated well.

On the whole, Chaavu Kaburu Challaga is a different love story with a unique premise. The emotions are neat but the love story is dull. Karthikeya does well in his role and holds the film for the most part. The film has some decent emotions at regular intervals but the rest of the film is quite dull with mundane scenes and ends as an okay watch this weekend. Just keep your expectations low.