Review : Check – Has its moments 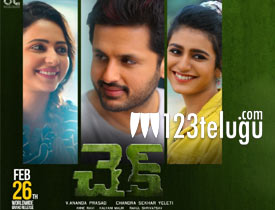 Chandrasekhar Yeleti, who is known to direct some gripping dramas is back with his new film Check. The film starring Nithin has released today and let’s see how it is.

Aditya(Nithin) is one among five terrorists who is given death sentence by the court of law. He hires a lawyer(Rakul Preet Singh) to fight his case but does not have much luck. During his stay in jail, he learns Chess and becomes a master at it. The rest of the story is as to how Aditya uses the game of Chess to prove that he is not guilty.

The premise of Check is quite good and looks realistic as well. The jail setup and the whole crime atmosphere in the barracks have been created quite well. The art department needs a special mention as the set work is supremely good.

Nithin takes a complete U turn from what he normally does and performs according to his character. Though he looks rustic in the beginning, Nithin gives a superb performance by the end. One should appreciate him for choosing a film which is devoid of commercial aspects like romance and songs as the star hero perfectly suits his ole.

Rakul Preet Singh is the unsung hero of the film as she does a very good job in her role as a lawyer. She holds the attention with her emotions and serious act. Rakul was quite good in the courtroom scenes. Priya Varrier makes a decent debut but did not get much to do. Her chemistry with Nithin was good.

Sai Chand was very good as the Chess guru. All his scenes with Nithin were quite good. Murali Sharma did his role well and so did Aziz Nasser who played the negative cop’s role. Harshvardhan was also neat in his fun role.

One of the biggest drawbacks of the film is that it does not have those gripping emotions that Yeleti’s previous films used to have. The film’s protagonist is going through a death sentence but there is no intense emotion that is carried through his character.

The film has a roller coaster kind of a feel as some good scenes are followed by several dragged and boring scenes. Sampath and his senior cop’s role looks forced as the senior actor overacts to no extent which was not needed at all.

The climax looks logically okay but is a bit forced. The ending which is given will have a mixed feeling and one would not expect it to happen. This makes the ending quite uneven. The second half is a tad slow and pace drops with multiple fights in the jail which could have been trimmed.

Music by Kalyani Malik is okay but his BGM was quite good. The costumes for the inmates, production design and camera work was quite good. The dialogues were neat and so were the lyrics. Editing was just about okay as scenes in the second half could have been trimmed.

Coming to the director Yeleti, Check is surely not his best work to date. But he extracts good performance from Nithin and Rakul Preet. His story idea and the whole narration has a few setbacks but he ends the film with an unexpected twist. His screenplay in a few scenes in the jail was quite good.

On the whole, Check is a serious sports drama with a crime backdrop. The setup is good and Nithin does well to hold the attention. But a slow pace in the second half and lack of grip in the emotions are a few demerits. Barring this, if you lower your expectations and watch the film, Check ends as a passable watch this weekend.