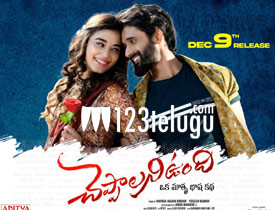 After God Father, Super Good Films is back with a new movie called Cheppalani Undhi. Starring Yash Puri and Stefy Patel, the movie has hit screens today. Let’s see how the movie is.

Chandu (Yash Puri), a Telugu-loving tv reporter with a sense of social responsibility, met with an accident just a night before an important day. The accident left him to forget Telugu and he starts speaking in an unknown language. Everyone including his lover Vennela (Stefy Patel) fails to understand his new language. What happened then? Did he overcome the language problem? What’s the important day? Watch the film to know the answers.

Director needs to be appreciated for choosing a good point to narrate. He tried his best to narrate the film in a good manner. Coming to performances, Yash Puri gets good marks. He has good comedy timing besides acting and dancing. It’s his second film in Telugu and the way he improved his acting is impressive. On the other hand, Stefy Patel looks nice and she gives the best of her.

Comedians Satya and Prithvi entertain with their witty punches throughout the film. Tanikella Bharani, Rajiv Kanakala and others are good in their respective roles.

The director’s aim to say to protect our mother tongue. The point is good but he failed to narrate in a good manner. The point gets diluted with unnecessary lag and scenes, especially in the second half of the movie.

Also, the director makes the film’s climax end in a forced way. He could have narrated the story in a better manner by writing an engaging screenplay. Though Yash performed well, his efforts went in vain because of poor execution.

The story is fine but the execution is not. A better screenplay could have made Cheppalani Undhi a better flick. Many scenes need to be chopped off in the flick, especially in the second half. Thus, the movie could be more crisper. Cinematography is neat, mainly in the pre-climax. Music is just okay and no songs will be remembered once we are done with the show.

On the whole, Cheppalani Undhi is a mediocre film with bad execution. Yash Puri’s performance and comedy by Satya and Prithvi are enjoyable. Despite having a good point to tell, the film fails to amuse audiences with a boring screenplay. The film is only for audiences who like to watch different storylines and otherwise look out for other options.