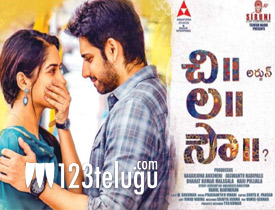 Chilasow is one film which has been in the news for the last few days. The film which is backed by Annapurna Studios has hit the screens today. Let’s see how it is.

The story is about a guy called Arjun(Sushanth) who does not believe in the concept of marriage. He is forced to meet a girl called Anjali(Ruhani Sharma) as a part of his marriage alliance. Arjun meets Anjali and starts liking her in her first place. But to his bad luck, Anjali’s personal problems take center stage and leave her least interested in Arjun. Rest of the story is as to how Arjun woos Anjali to be his partner for life.

The backdrop where the love story is set is unique and has not tried before. Credit should go to director Rahul for taking a simple story and setting it beautifully amidst moving family emotions. The consequences in which the lead pair fall in love and how all of it is balanced is the best part of Chi La Sow.

Chilasow is a career-defining film for Sushanth as he makes a decent comeback. With this film, it is clearly proved that he is a perfect fit for doing rom-coms. He looks settled and is at ease with his role. Rahul Ravindran has showcased him quite well and it will be good for Sushanth if he continues choosing films which suit his age and image from now on.

Ruhani Sharma makes a sparkling debut and boy she impresses big time. For a first-timer, she has emoted quite well and handled her complex role with a lot of responsibility. The confrontations are natural and make way for some crackling chemistry between the lead pair. Yet another good performance of the film was from Rohini who plays heroine’s mom. She is very natural and adds a lot of depth to the proceedings.

The romantic scenes have been written with so much conviction. Then, there is the best comedian of our times, Vennela Kishore who lights up the screen with his hilarious comedy. Though he is not there for most of the time, his scenes evoke good laughs for the audience.

Like in all love stories, the end is always predictable and one knows what is going to happen next. Even though the proceedings are narrated well, they take their own sweet time to unfold and this might no to go well with regular movie audience who like the song and dance template.

The interval episode could have been a bit stronger as the proceedings during this time end on a very simple note. The police episode is prolonged a bit and some scenes can be edited out to make things better.

The production values are pretty good. As the movie happens mostly in the night, the scenes have been lit up well. The cameraman did a good job but he could have avoided a lot of closeups. Music is just about okay but the background score was impressive. Dialogues were impressive and so was the entire production design and editing. The heroine’s role gets an added life because of Chinmayi’s beautiful dubbing.

Coming to the director Rahul, he makes an impressive debut with Chilasow. His writing is fresh and gives this unusual love story a twist with his interesting narration. Though he starts things slow, Rahul balances everything in the second half. The mix of comedy, romance and family emotions work exceptionally well. Being an actor himself, Rahul was quite sensible with his narration and did not allow the audience attention to deviate which is a tough thing these days.

Generally, romantic films are full of dance and fancy romance. But debut director Rahul Ravindran makes things interesting by creating a love story in an unusual situation and shows that how love can blossom with just a few precious moments. Sushanth will get the break he is looking for and Rahul Ravindran is a director to watch out for. The pace of the film is a bit slow and the regular movie watchers will find things little tough as there are no commercial elements involved. Apart from this, Chilasow is a well made romantic drama which keeps you hooked. Go for it.