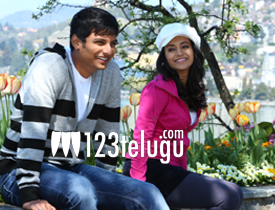 Chirunavvula Chirujallu is a dubbed version of the Tamil hit Endrendrum Punnagai starring Jeeva and Trisha. This movie has hit the screens today and let’s see how it is.

Goutham’s (Jiiva) mother abandons him when he is just ten years old. Angry at his wife’s attitude, Nasser(Goutham’s father) criticizes women and accuse them of being dishonest and selfish. Goutham, who is deeply affected by this also grows up to hate and distrust women.

He along with his two best friends (Vinay) and Baby (Santhanam) sets up a production house. As time passes by, a girl named Priya(Trisha) enters their life as a business partner and causes a few problems between the best friends. A depressed Goutham leaves his friends and heads to Europe along with Priya.

There, the couple fall in love with each other. But after a point of time even they get separated because of Gautam’s personal problem. What is that problem ? Will the couple reunite in the end ? and what happens to Gautham’s best friends ? That forms the rest of the story.

The major asset of this movie is the theme which deals with friendship, romance and the special bond between a father and his son. The quirky narration also plays a major role in the positive outcome of the film. There are some very entertaining scenes in the film which create a interest among the audience. All the romantic scenes between Trisha and Jiva have been designed well.

Jeeva has done a decent job in a well established role. Trisha, as usual looks gorgeous and her charm is a positive aspect in this flick. The first half is thoroughly entertaining and some well timed songs also impresses the viewers.

A predictable story line is the major drawback of this flick. Some scenes in second half have been dragged to the core which is a big let down. The tempo of the film during this part goes down completely.

So many characters have not been given due importance and lack clarity. A below par climax also ruins the film to an extent. Andrea’s role looks out of place and does not create much impact. There are some vulgar sequences which could have been totally avoided.

Cinematographer Madiyea should be given due credit as he showcases the beautiful locales of Europe supremely well. Despite a routine story, the director’s narration and interesting screenplay gives the film a special touch. Music director Harris Jayaraj gives a decent music score as all the songs have been composed and shot well. Dialogues are graceful and blend with the film nicely. Production values are good and showcase the film in a good light.

On the whole, Chirunavvula Chirujallu has some decent romantic moments. A entertaining first half, Trisha’s glamour and simple set up are basic assets. If you ignore the predictable story line and a lack lustur climax, you can comfortably watch this film this weekend.