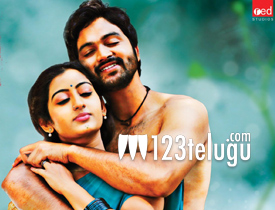 Continuing the trend of horror films, yet another low budget project which has hit the screens is Cine Mahal. Let’s now see how this film turns out to be.

The film is based in a small town where a young man called Krishna runs a movie theater. To his bad luck, the theater runs into huge losses and Krishna is left alone to repay all the debts which have been taken to maintain the theater.

After discussing with a few distributors, he plans to screen a film called ’13’ in his theater. The twist in the tale arises when the audience who come to watch the film keep dying in mysterious circumstances. Rest of the story is as to how Krishna goes about investigating these deaths and finds out what the actual truth is.

The backdrop of the film is quite interesting as the way the entire story is set in a theater sounds interesting. The way audience gets killed while watching the film has been executed quite well.

Comedy by Satya entertains in parts. The way one of the twists is revealed during the break time is very intriguing. Also, the manner in which the hero fights hard to remove the film from his theater looks quite interesting. His performance during these scenes is pretty decent.

One of the biggest drawbacks of the film is the lazy execution. Except for the interval block, rest of the film is quite routine and has many predictable moments. The main back story and the suspense behind it have been dealt with in a very poor manner. Also, the performances done by the supporting cast during these tense scenes is very bad.

The climax of the film is quite silly as the hero solves the entire two-hour mystery with just a simple scene. There are way too many logical errors in the film which have been overlooked completely. The climax is also hurried up as the proceedings have been wrapped up in a hurry.

Director Lakshman Varma had a very interesting storyline but the way he narrates the film in a simple and routine manner is disappointing. He designed the interval block well but for the rest of the film, he dilutes the plot with some very illogical and boring scenes. Shekhar Chandra’s music is just about okay and so was Venkat’s camera work. Editing is below average as some scenes during the second half could have been easily trimmed.

On the whole, Cine Mahal is yet another routine horror comedy which has nothing much to offer. An interesting interval bang and Satya’s comedy are some assets. But the lack of gripping horror elements, boring first half and climax spoil the fun completely and make this film a below par fare this weekend.