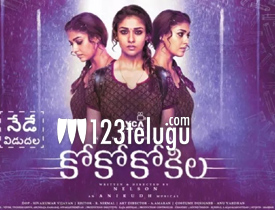 Starring Nayanthara in the lead role, Kolamavu Kokila was a decent hit at the Tamil Nadu box office. The Telugu dubbed version, CoCo Kokila hit the big screens today. Scroll down to check whether the movie manages to impress the viewers.

Kokila(Nayanthara) hails from a poor family and needs money to cure her ailing mother. In search of some substantial help, she meets a drug dealer and comes to know that this business can yield her decent money in quick time. After a few twists and turns, Kokila gets involved in a drug cartel’s internal war and also gets her entire family at risk. What are the hurdles she has to overcome in order to save her family? Will she be successful in this process? The answers to these questions form the core plot of the film.

The entire movie revolves around Nayanthara and her financial crisis. The star heroine does complete justice to her role and carries the movie on her shoulders with a subtle performance. These kinds of dark roles demand a lot from an actor and Nayanthara proved that she is up for the challenge.

The entire setup in the first half looks realistic and the drug dealing business has been portrayed with a great deal of authenticity. The likes of Yogi Babu, Mottai Rajendran, and Saranya get meaty roles and perform in a settled manner.

The silly comedy that has been generated through the supporting roles works in bits and parts. Especially, Yogi Babu, he made his mark with his funny antics and typical mannerisms. Music by Anirudh Ravichander is a big asset for the movie as his background score notches up a few scenes, which otherwise would have come out dull and unappealing.

The movie progresses at its own pace and a few scenes have been dragged unnecessarily. The unconventional narrative tampers the flow of the proceedings every now and then. The second half starts on a confusing note as the heroine’s family are forced to make the biggest decision in their lives but the director chose to insert comedy track here and that ends up as an unconvincing twist in the tale.

The movie has been made in an out-and-out Tamil Nadu backdrop, which takes a toll on the relativity factor for the Telugu audience. This surely plays the spoiler part as a section of viewers cannot connect with the movie.

The emotional episodes during the pre-climax episode look way too routine. These kinds of movies can impress the viewer only if he/she leaves the theater with a clear mind but this movie has a fair number of loose ends.

The director, Nelson, picked up a peculiar storyline and manages to impress the viewers to an extent. He tried to infuse dark comedy with a strong storyline but his narration falls flat during the latter part. As said earlier, Anirudh Ravinchander is a blessing to the movie as he manages to save many scenes with his clap-worthy background scoring. There is only one song in the album and the peppy number was executed well on the screen.

The camera department played their part as the shady visuals have been captured well. The movie was made on a very minimal budget as the entire plot deals with a slum area in rural Tamil Nadu.

On the whole, CoCo Kokila is an unconventional dark comedy that has a serious plot. Good performances from Nayanthara and the supporting cast bring an authentic vibe to the movie. But the narration goes bland in the latter part taking a toll on the overall experience. If you are fed up with routine movies and do not mind an unorthodox comedy thriller with heavy Tamil flavor you can give this movie a shot