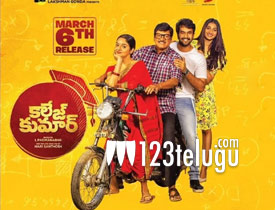 Among the other low budget films that released today, College Kumar is another film that many did not know about. Lets now see how this film turns out to be.

Sasi Kumar(Rajendra Prasad) is a small-time peon in an office. As he has suffered much in life, he decides that his son Siva Kumar(Rahul Vijay) should not suffer and gets him into a good college. But Siva Kumar cheats his dad and gets caught. Upon confrontation, Siva says to his dad that studies are not his cup of tea and if he has the courage to study at this age, prove it to him and he will listen to him always. Sasi Kumar takes this as a challenge and joins the college. What will the father do now? Will he prove his son wrong by getting educated? To know this, you need to watch the film.

Hero Rahul Vijay is improving with each passing film. In this movie, he has a good screen presence and did his crucial role quite well and also rallied the film on his shoulders. Tamil actors, Manobala and Nasser did their supporting roles quite well.

Rajendra Prasad once again showed what a class act he is. Even at this age, he is giving competition to young heroes and is superb in his role. His comic timing and emotional outbursts are superb in the film. Heroine Priya Vadlamani was impressive in whatever screen presence she had.

Except for the son making his father study in a college looks new, the rest of the story, emotions and scenes are the same. Even their treatment is not new and makes the proceedings boring. The love track between the lead pair is a big letdown and does not create any impact on the film.

The comedy generated by Rajendra Prasad in the second half is quite boring and looks out of the box. The person who is getting depressed is life seeing his son idle becomes normal and happy after joining college. This looks silly and has forced emotions.

Only one song is good and the rest are bad. The BGM is also not up to the mark. Editing is pathetic as so many scenes could have been chopped off. The production values of the film are below par. Dialogues are decent and so was the camerawork. Coming to director Hari, his basic idea is good but the treatment is old school and has the same old sentiment and formulaic scenes which we have been seeing from the last ten years.

On the whole, College Kumar has an interesting point but the narration is old school as the film is filled with boring and predictable moments. Except for Rahul Vijay and Rajendra Prasad’s performance, there is nothing much to look forward to in this film which is like old wine in an old bottle. Ignore it.