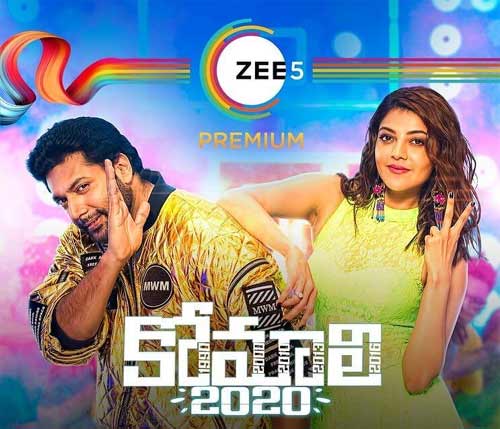 Continuing the trend of reviewing shows and films on OTT, today, a Telugu film called Comali has hit the small screens. The film is available on Zee 5 and let’s see how it is.

Ravi(Jayam Ravi) is a young man who grows up in the ’90s when things used to be normal without the advent of technology and crazy social media glare. But an accident puts him into a coma and he awakes 16 years later in 2016 only to find out that the world has changed around him. He has no clue what is going on with people going crazy. How does he handle himself and what role does Kajal Aggarwal play in this setup is the whole story.

Jayam Ravi does a decent job as the guy who comes of age through the film. His innocent looks and the manner in which he makes a transition is showcased well by the actor. Comedian Yogi Babu gets a very good role and he does a superb job in the film. His role also has scope for performance and the comedian does well in it.

Kajal has nothing much to do in this film but whatever scenes she gets, Kajal does a passable job. Smayuka Hegde is also neat in her key role. The Chennai flood scenes are nicely incorporated into the story and the VFX done for this also looks cool.

The manner in which Jayan Ravi leads his carefree life in the ’90s has been showcased well. The transition between the past and present times and is neatly showcased. The comedy satires also are addressed well. Finally, director KS Ravi Kumar, who plays an interesting role is also impressive.

The climax looks a bit stretched and could have been ended on a simple note. Also, the film misses the logic in many areas especially in the time zones it is showcased and the whole coma angle of Jayam Ravi.

The second half is the place where things get bogged down as the scenes get too melodramatic. The scenes become way too preachy and spoil the mood of the audience a bit. The humor is a bit over the top and might not click with a section of the audience.

Music by Hip Hop Thamiza is pretty decent and the score composed for scenes in the second half is impressive. The art direction needs a special mention as the drastic changes between the ’90s and 2016 have been showcased in a superb manner. Editing is neat and so was the Telugu dubbing. Also, VFX and camera work was pretty good.

Coming to the director, Pradeep, he has chosen an interesting story and narrates it well for the most part. But in the latter part of the film, he makes things too heavy and overdramatic and silly.

On the whole, Comali is a fun drama that has an interesting storyline. The first half, comedy scenes, and Jayam Ravi’s performance are major assets. But the slow second half, overdramatic scenes, and the dragged climax take the film down a bit. If you ignore the logicless comedy, this film ends as a passable watch this weekend.